The Montreal Canadiens pushed the Winnipeg Jets to the brink with a sound 5-1 beating in Game 3. They entered the postseason as the lowest-seeded team, and now they're one win away from punching its ticket to the Stanley Cup semifinals against the winner of the Colorado Avalanche-Vegas Golden Knights series.

The Canadiens led Sunday's Game 3 wire to wire, something we have seen a lot from them lately. Montreal has not trailed in 376:14, and that's the fifth-longest streak by any team in NHL postseason history. Who could ever have seen that coming? Carey Price has been tremendous, winning six consecutive games, and the offense picked up the pace with five goals, tying the most in this postseason. They also won Game 1 against the Jets by a 5-3 score.

The Jets had been getting very good production from Connor Hellebuyck, but he disappeared in Game 3 when they needed him most. Price has been stealing games and/or just dominating, and that's always the recipe for success and a lengthy postseason run. It's working, and it's happening.

Winnipeg has dropped four in a row in this series, although if you're looking for a glimmer of hope for the Jets, the road team is 4-1 in the past five meetings, and the underdog is 6-1 in the past seven meetings. The Over is 8-2 in the past 10 meetings overall, and 5-1 in the past six battles in Montreal. 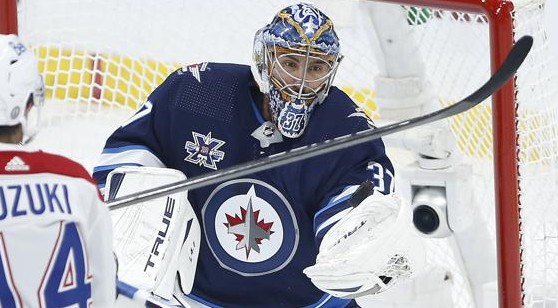 The Winnipeg Jets have lost four straight games when facing the Montreal Canadiens, outscored 16-7 in those games. (AP)

I am not going to get tricked by the Jets again. The swept the Edmonton Oilers in the first round, and perhaps I overvalued that a little bit. I picked the Jets in Game 1, and they got crushed. I picked the Jets in Game 2, and they lost a 1-0 game, failing to show any heart after the Mark Scheifele incident. In Game 3, surely the Jets would show some fight, working hard to stay in the game and prolong their season, right? Wrong. They were curb-stomped by Les Habitants, and they haven't had a lead at any point in this season.

I am not trusting the Jets again. It's time to start believing in the Canadiens, who have come back from near-death in the Toronto series, down 3-1, and they have rattled off six in a row to get themselves one game away from the NHL's version of the Final Four. In a season of strange happenings, the run by the Habs has been amazing. Bank on them and Price in Game 4.