We’ll see just how resilient the Vegas Golden Knights are on Sunday night. The Golden Knights suffered an extremely tough loss in Game 3. They were in control of the action the entire way and led the Montreal Canadiens for most of the third period.

However, an egregious blunder by Marc-Andre Fleury gave John Anderson a gift of a goal with less than two minutes left in the third period. Anderson ended the game with his second goal 13 minutes into overtime, letting the Canadiens steal a win and take a 2-1 series lead. The Golden Knights must get off the mat in Game 4 or risk facing elimination when they head home.

This is a virtual must-win for Vegas. Another loss would be crushing after what we saw in Game 3. The Golden Knights lost despite dominating the run of play and outshooting the Canadiens 45 to 27 on Friday. I expect them to come out firing and dominate Game 4 to even the series.

Fleury’s gaffe was the story of Game 4. He has been one of the top goaltenders in the postseason, but he has occasionally had trouble handling the puck throughout his career. That factored into Pittsburgh’s decision to leave Fleury available in the 2017 NHL Expansion Draft although he was a part of the Penguins’ three Stanley Cup wins in 2009, 2016, and 2017.

Although Fleury’s mistake cost the Golden Knights on Friday, don’t expect Robin Lehner to start in net. Lehner was abysmal in his one start this postseason, allowing seven goals in a blowout loss to the Colorado Avalanche. Head coach Peter DeBoer has stuck with Fleury since that point, and Fleury has largely played well.

Thousands of words have been devoted to Fleury, but the bigger issue for Vegas in this series has been the lack of production from their forwards. Only two of the Golden Knights’ eight goals through three games have come from forwards. Mattias Janmark lit the lamp in Game 1, and Nicolas Roy opened the scoring in Game 3.

While it was nice to get goals from Janmark and Roy, those aren’t the players that have brought the Golden Knights to this point. William Karlsson, Max Pacioretty, Jonathan Marchessault, Alex Tuch, and Mark Stone all have at least four goals this postseason, but all five of those forwards have been held without a goal through three games.

Vegas needs at least one of those players to get going in Game 4. Pacioretty would certainly love to score on his former team, but anyone coming through will provide a huge boost.

The last two games have gone the way the Montreal Canadiens need them too in order to pull off the upset and win this series. Montreal only has a couple good offensive players, so the Canadiens aren’t going to win shootouts.

Carey Price has been exceptional this postseason. He is now 18-0 in games where the Canadiens have scored at least three goals, and he stopped 43 shots in Game 3 on Friday night. Price has a 2.10 GAA and a .932 save percentage through 14 games in these playoffs.

We saw Tyler Toffoli’s eight-game point streak come to an end on Friday. Toffoli is the only Montreal player with at least 10 points this postseason, so the Canadiens are hoping he can start another streak in Game 4.

The Canadiens won’t have Dominique Ducharme on the bench for the rest of the series. Montreal’s head coach tested positive for COVID prior to Game 3, and Luke Richardson will call the shots until Ducharme is able to return. 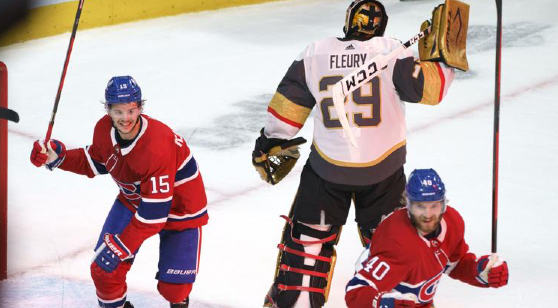 The Montreal Canadiens have won six of their last seven games when facing the Vegas Golden Knights. (AP)