The second period has been great for the New York Islanders this postseason. The Isles have outscored their opponents 23 to 10 in the second period in these playoffs, and they rode a strong second period to a 3-2 win over the Tampa Bay Lightning in Game 4 on Saturday night. New York scored three goals in the span of 12 minutes and 27 seconds, evening their series with the Lightning at two. This is now a best-of-three series heading into Game 5 on Monday night in Tampa.

Andrei Vasilevskiy has had a great postseason. He has yet to hold the Islanders scoreless this series, but it’s only a matter of time. We will see a fantastic performance out of Vasilevskiy in Game 5. 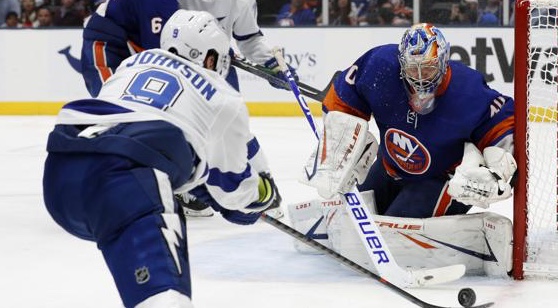 The New York Islanders have won five of their last seven games when playing as the underdog. (AP)

The Lightning may have lost Game 4, but they are unlikely to be feeling too dejected after that defeat. Although Tampa Bay went down 3-0 late in the second period, this team roared back and nearly sent the game to overtime in the final seconds.

Brayden Point got Tampa Bay on the board early in the third period with a seeing-eye snapshot that beat Semyon Varlamov, and Tyler Johnson pulled the Lightning within a goal less than three minutes later. That set up a furious final 13 minutes and change that saw the Lightning have a couple great chances.

The best chance came just before the end of regulation. Ryan McDonagh got the puck near the top of the circle, and Varlamov moved too far out of his net to challenge McDonagh. When McDonagh spun around, the net was wide open, but Ryan Pulock saved the day and blocked the shot with less than three seconds left on the clock.

Tampa Bay is still in good shape in this series despite the loss. Both Lightning losses have been by a single goal, and they will host two of the last three games if the series goes seven.

Point has been sensational for the Lightning this postseason. His 12 goals are the most in the NHL during the playoffs, and he has scored in each of the last seven games. He has yet to record an assist in this series, but he has proven he doesn’t need the power play to light the lamp with three of his four goals coming on even strength.

Unfortunately for the Lightning, Nikita Kucherov hasn’t scored since Game 4 against the Carolina Hurricanes in the last round. While he has done a great job distributing the puck with 10 assists in his last seven games, Tampa Bay needs him to score goals too considering the struggles of Steven Stamkos and Alex Killorn.

Stamkos and Killorn have combined for 11 goals this postseason. Neither player has scored in this series though, and they each have just one assist against the Isles. New York does a great job shutting teams down in the neutral zone, but both Stamkos and Killorn are capable of more than what we have seen this series.

The Isles have gotten scoring from their best offensive weapon. Mathew Barzal has scored in six of New York’s last eight games, and he has three goals against Tampa Bay. That has kept the Islanders in every game despite the offensive talent on the Lightning.

Kyle Palmieri, Josh Bailey, and Brock Nelson have combined for 20 goals in the playoffs, but they have scored just twice against Tampa Bay. Barry Trotz would love to see them provide more help up front, but the Isles know they can’t play a wide-open game with the Lightning.