The 8-0 final underscored the thrashing that Tampa Bay laid on New York, but it was just a single game at the end of the day. However, there is no longer any margin of error for the Islanders. They face a do-or-die Game 6 at home on Wednesday night.

This is the point at which the Islanders were eliminated by the Lightning in the Eastern Conference Finals last season. There will be more than a little bit of déjà vu as the Lightning carry the momentum into Game 6 and get on the board early.

Try as they might, the Isles will fail to get more than a goal past Andrei Vasilevskiy in a series-clinching win for the defending Stanley Cup champions. 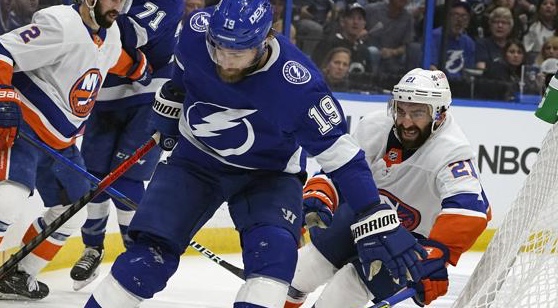 The home team has covered the puck line in four straight games played between the Tampa Bay Lightning and New York Islanders. (AP)

Everything that could go wrong, did go wrong for the Islanders on Monday night in Tampa Bay. The Lightning outshot the Isles 19-5 in the first period, and Steven Stamkos got the hosts on the board in the first 35 seconds. Yanni Gourde and Alex Killorn also added goals in the period, and the rout was well in the making when Stamkos added his second goal within the first six minutes of the second period.

At that point, it was all about making a statement for the Islanders. They racked up 57 penalty minutes in the second and third periods of Game 5. Mathew Barzal, Scott Mayfield, and Matt Martin all received game misconducts.

Barzal was fortunate to not receive a one- or two-game suspension too. The NHL Department of Player Safety instead elected to simply fine Barzal the maximum amount allowed under the CBA. Barzal was the Islanders’ best offensive weapon during the regular season, and he has scored in six of the last nine games.

The Islanders have yet to score more than three goals in any game during this series, and they have scored two or fewer goals four times in their five games against the Lightning. This isn’t a team that is going to score a lot in Barry Trotz’s system, but they need some kind of offense against a Tampa Bay team that hasn’t been held scoreless through 16 games this postseason.

We’ve seen Barzal come through for the Islanders. However, Kyle Palmieri has yet to record a point in five games against the Lightning after tallying seven goals and two assists in the Isles’ previous two series. Brock Nelson has just a goal and an assist after scoring six goals in the two previous series, and Josh Bailey also has just a goal and an assist after recording five goals and six assists to lead the Isles in points ahead of the Stanley Cup Semifinals.

New York needs to get going on the power play. The Islanders have converted on just one of their 13 power play opportunities against the Lightning in this series. They had converted on 28.1% of their chances in their first two series against Boston and Pittsburgh. Jon Cooper and the Lightning know that if they can score three goals, they have a great chance to win Game 6 and advance to the Stanley Cup Finals.

The Isles have done a good job holding them in check, but what we saw on Monday night may be a portend of what’s to come on Wednesday.