The English Premier League is back in action, and two of the most iconic clubs square off against each other at the Tottenham Hotspur Stadium in London. Manchester United hasn't played in the EPL since March 8 when they tattooed crosstown rivals Manchester City by a 2-0 margin, and they routed LASK Linz 5-0 in the first leg of the UEFA Europa League.

Tottenham enters this one on the complete opposite trajectory. They were dropped 3-0 last time out in a UEFA Champions League battle against RB Leipzig, and they're 0-4-2 across their past six battle since last tasting victory in EPL play in a 3-2 shootout against Aston Villa on Feb. 16. They were 5-0-2 across seven games from Jan. 14 to Feb. 16, so the Hotspurs are capable of, pardon the pun, getting hot and playing with anyone in the world. 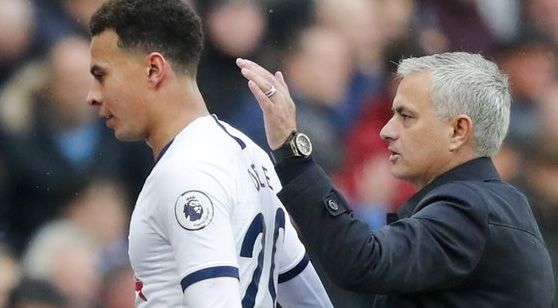 Jose Mourinho and Tottenham won't have the support of its fans at home when it meets Manchester United on Friday night from London. (AP)

Tottenham has had a very difficult go of it lately, posting three wins across the past 10 in England's top league. While they're nowhere near relegation or anything so severe, they're still hoping that the lengthy break due to COVID-19 sorta helps them hit the reset button to get them back to the form which had them ticking off regular wins once we flipped the calendar from 2019 to 2020.

It's an embarrassment of riches for Manchester United, as they're quite deep, and now they have had two of their top stars, Paul Pogba and Marcus Rashford are fit and ready for a return. In fact, only Phil Jones is listed among the injuries for the visitors. That's ominous for the Hotspurs, who are in desperate need of a signature win.

Manchester United has racked up four victories in the past five meetings, including three straight wins dating back to Aug. 27, 2018 across all competitions. Seeing ManU on the schedule isn't great news for the Hotspurs, as they're in the midst of a six-game winless skid across all competitions, including a 3-0 setback against RB Leipzig in the second leg of the UEFA Champions League on March 10, their last official competition before the break.

Manchester United (+138) hits the road looking to pick up right where they left off before the pandemic caused a three-month break in the middle of the season. They aren't likely to be denied, especially now that they're near 100 percent healthy. Tottenham has the talent to start ticking off regular wins again, but they won't be spurred on, again, sorry for the pun, by their home crowd, since no fans will be in the stands on Friday. It's hard to imagine Tottenham slowing down a United team which was rolling right along across all competitions before the virus interrupted the world.

Both of these teams can score, as they have combined for a total of 87 goals. United is averaging 1.52 goals per game, while Tottenham is averaging 1.62 goals per outing while yielding 1.38 goals per contest. You can expect Manchester United to find the back of the net early and often, while the Hotspurs should also get on the board at least once in their home park.

If you're thinking about picking a scorer from the Hotspurs, it has to be Kane (+188). He has rather favorable odds under the 'Score Anytime' props. For Manchester, Martial (+180) and Rashford (+140) are among the favorites. Martial has buried 11 goals in 23 matches, while Rashford leads the team with 14 goals across his 22 outings. If you're looking for a long-shot, consider McTominay (+500), as he has found the score sheet four times in 20 matches.

Champions Round of 16 Outlook