La Liga, the top soccer league in Spain, will resume action on Thursday June 11, 2020 after a three-month break due to the global coronavirus pandemic. The opening match will be nationally televised in the United States at 4:00 p.m. ET as Real Betis and Sevilla square off in what will be a primetime match in Span.

The Seville Derby match will be played at Ramon Sanchez Pizjuan Stadium. The venue hasn't really seemed to matter in Bundesliga action up in Germany, as having no fans in attendance giving neither side a real distinct advantage. Will that carry over to La Liga and other European leagues? We'll get answers to that question on Thursday night from Spain! 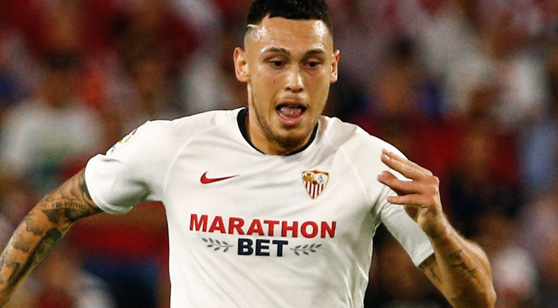 Lucas Ocampos of Sevilla has been a great weapon for the club and is expected to lead the club in their La Liga restart. (AP)

The better team here is the home team, however, as Sevilla has managed a 13-6-8 mark with 39 goals and a plus-10 goal differential. They sit third in the La Liga table with 47 points, nine behind second-place Real Madrid.

Real Betis (8-10-9) surprised Real Madrid before the pause. However, they still have 38 goals and a minus-5 goal differential, fumbling their way to 12th in the overall table, as inconsistency has been their calling card this season.

Sevilla posted two or more goals in each of their previous four La Liga matches, and they have found the back of the net in five of their past six against Real Betis across all competitions. Toss in the fact that Sevilla has been unbeaten in seven straight games at home before the break, and 10 of their past 11 on their home turf, and you'll know why they're heavily favored in this one.

On the flip side, while Real Betis doesn’t have to go very far, they will be on the road. They have failed to pick up a win in their previous six matches away from home.

Sevilla has won each of the past two meetings in this series, albeit by one-goal margins. They’re 3-2-1 across the past six head-to-head meetings, with five of the matches decided by one goal or less. More importantly, five of the previous six head-to-head battles have resulted in 2.5 or more goals. Real Betis has hit Over 2.5 or more goals in each of their past three La Liga matches before the break, too.

In addition, rolling with the Over 2.5 goals in regular time is a good way to go. Sevilla could take care of that over all by themselves, as Real Betis has been awful defensively. Only Mallorca (44) and Espanyol (46) have yielded more goals in La Liga play.

For an added bonus, check out Lucas Ocampos to score a goal in this one. His anytime odds to score at some point in the match are plus-money, and a good value. He has managed 10 goals for the home side this season. If you look to Real Betis scorers, Nabil Fekir is a good play. He has found the back of the net on seven occasions.