Heading into Matchday 27, Chelsea and Thomas Tuchel sit in 4th position on the league table with 47 points won from their 26 games played while Everton and Carlo Ancelotti have won 46 points and placed 5th on the table.

The clubs are separated on the league table by 1 place and 1 point with 26 matches played so far this season.

Chelsea claimed a win against Liverpool in their previous match, giving them a form run of W,D,W,D,W and a total of 11 points from their last five matches.

Their opponents Everton took a win against West Bromwich Albion in their previous match and now own a run of form of W,W,W,L,L and 9 points in their last five matches.

Considering home and away form, Chelsea have won 11 points in their last five matches at Stamford Bridge.

Visitors Everton have now won 13 points from their last five matches away from home.

Chelsea vs Everton Head To Head

Over the years, Chelsea and Everton have met on a total of 53 occasions.

Chelsea have won a total of 27 matches against the visitors, while Everton have claimed a total of 11 wins.

Matches between the clubs have ended drawn on 15 occasions.

Chelsea won their last match. Thomas Tuchel’s men played against Liverpool. At the final wistle, the scoring board showed 1 – 0.

Against Liverpool, Chelsea claimed 46% of ball possession. If we look at shots on goal, Chelsea had a total of 10 shots while they conceded 7 shots.

At the final wistle, the score board showed 1 – 0. Stats against West Bromwich Albion, shows that Everton had 52% of ball possession.

If we look at shots on goal, Everton had a total of 10 shots while they conceded 10 shots. 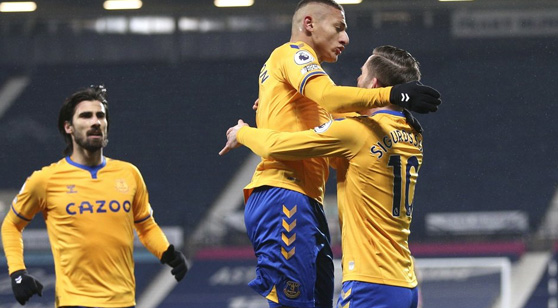 Everton enters Monday's match on a three-game winning streak and Richarlison has scored goals in all three of those games. (AP)

The Thomas Tuchel era at Stamford Bridge has shown promise for the Blues, especially on defense.

Chelsea is unbeaten in 10 games (7-3-0) under the new coach since taking over on Jan. 27 and they've only allowed two goals during this run.

This particular series has seen clean sheets posted in five of the last six encounters and that includes Everton's 1-0 home win over Chelsea on Dec. 12, 2020.

This is a very intriguing match since Everton sits one point behind Chelsea for the coveted fourth position in the table, which provides a Champions League bid.

The Toffees bring a three-game winning streak into this away fixture and their offense has traveled well, 21 goals scored as visitors. And that's better than their home tally of 18 goals.

The Blues don't allow much on defense at home but I believe Everton will get through and both teams will accept a draw on Monday and continue to separate in the table over the final two months of the season.

Markets available at BetMGM-Subject to Change