Atlético Madrid are four points clear of Barcelona at the top with ten games to go. The two sides meet on matchday 35, and until then, this is Atléti’s biggest test.

Sevilla have little to play for. They are fourth, with almost no chance of winning the title and with 10 points separating them from fifth.

Diego Simeone is nothing if not cautious, and so would probably take a draw here. This is must-not-lose, rather than must-win.

These are Spain’s two best defences. In 28 games Atléti have conceded 18, and Sevilla 21. 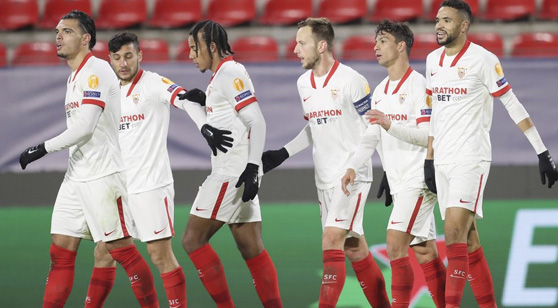 Goals could be tough to come by for this La Liga match as Sevilla and Atletico Madrid own the top two scoring defenses. (AP)

Atletico Madrid visit Sevilla on Sunday Apr. 4, 2021 in Spain's LaLiga with the match set to kick off at 19:00 local time at Estadio R. Sanchez Pizjuan.

Coming into this Matchday 29 match Julen Lopetegui’s Sevilla club are placed in 4th position having won 55 points from their 28 games played while Diego Simeone’s Atletico Madrid team have earned a total of 66 points placing them in 1st position on the table.

With 28 matches played in the season, the clubs are separated on the table by 3 places and 11 points.

Sevilla have now earned a total of 8 points in their last five matches, with a form run of D,W,W,D,L having earned a draw against Real Valladolid in their previous match.

Visitors Atletico Madrid had a win against Deportivo Alaves in their last contest and have claimed a total of 8 points from their last five matches to give them a form run of W,L,D,W,D.

In their last five matches played at their Estadio R. Sanchez Pizjuan, the hosts Sevilla have now won a total of 9 points.

Meanwhile Atletico Madrid have collected a total of 8 points in their last five contests away from their home stadium.

Sevilla and Atletico Madrid have played a total of 48 times previously.

Entering this match, Sevilla have won 16 of the previous 48 meetings between the clubs, while visitors Atletico Madrid have won 17 times.

The clubs have drawn 15 times.

Sevilla drew their last game. Julen Lopetegui's men were facing Real Valladolid in that game. At the final whistle, the scoring board showed 1 - 1. Against Real Valladolid, Sevilla claimed 69% of ball possession.

If we look at shots on goal, Sevilla had a total of 13 shots while they conceded 3 shots.