Schalke 04 are one of Germany’s proudest clubs and have been in the top flight since 1992.

That run is about to come to an end after a disastrous season. They are bottom with just ten points from 27 games, 15 from safety.

They have conceded an incredible 71 goals in that time and Augsburg, who look safe after a run of three wins from five, can add to their misery.

Augsburg are not a great side but they have a good record against teams currently below them in the table.

Schalke have won only one game all season and are likely to miss out on this chance to win a second. 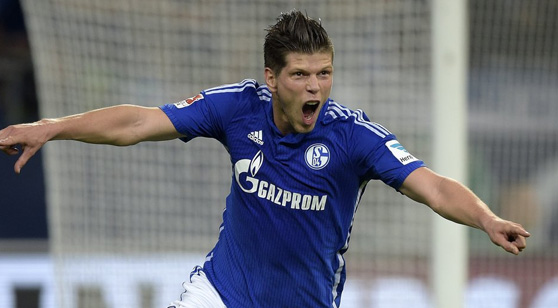 Schalke 04 sits at the bottom of the Bundesliga table despite solid play from veteran Klaas-Jan Huntelaar up front. (AP)

Coming into this Matchday 28 contest visiting Heiko Herrlich’s Augsburg club sit in 11th place in the league with 32 points from 27 games played while home club Dimitrios Grammozis’s Schalke 04 are currently on 10 points and seated in 18th place.

The two clubs are separated on the league table by 22 points and 7 places with 27 matches played so far this season.

ESPN+ subscribers can watch Schalke 04 vs Augsburg on Sunday plus plenty of other Matchday 28 action in the Bundesliga.

In their previous match, Schalke 04 had a loss against Bayer Leverkusen and have now won 1 point from their last five contests, with a run of L,L,L,D,L.

Their opponents Augsburg faced Hoffenheim in their last match and had a win giving them a total of 9 points in their last five matches and owners of a form run of W,W,L,W,L.

Considering home and away form, Schalke 04 have won 1 point in their last five matches at VELTINS-Arena.

Meanwhile, playing away from home their last five times, Augsburg have earned 3 points.

Schalke 04 vs Augsburg Head To Head

Over the years, Schalke 04 and Augsburg have met on a total of 20 occasions.

The hosts Schalke 04 have won 10 of those previous matches, while visitors Augsburg have won 2 times.

Games between the two clubs have ended drawn 8 times.

Schalke 04 lost their last match and Dimitrios Grammozis's men were facing Bayer Leverkusen in that game, which ended with a score of 1 - 2.

In their match against Bayer Leverkusen, Schalke 04 had the following ball possession : 40%. If we look at shots on goal, Schalke 04 had a total of 5 shots while they conceded 6 shots.