The Alabama Crimson Tide (10-3, 1-0 SEC) travel to meet the Florida Gators (9-3, 0-0) for a conference battle at Exactech Arena at Stephen C. O'Connell Center in Gainesville, Fla. on Wednesday. Tip-off is scheduled for 7:00 p.m. ET, and the game can be viewed on ESPN2.

The Crimson Tide of Alabama picked up a 73-68 victory over Tennessee last time out on Dec. 29, taking advantage of the fact the Vols were missing leading scorer Kennedy Chandler and top rebounder John Fulkerson due to COVID issues. While the Tide won, they failed to cover for the fifth consecutive game. The Tide shot just 43%, or 26-of-60, from the field, while hitting just 23%, or 7-of-31, from behind the 3-point line. To make matters worse, Alabama turned it over 15 times while registering just 14-of-21, or 67%, from the charity stripe. The Tide bailed itself out with 42 rebounds, including 10 on the offensive glass, to just 34 for the Vols.

We haven't seen the Gators since Dec. 22 before the holidays. Florida was scheduled to face Ole Miss on Dec. 29, but COVID issues in the Gators program called that one off. This will be the conference opener for the Gators, who are looking for a cover for the second consecutive outing after topping Stony Brook 87-62 as 18.5-point favorites last time out. Florida hasn't had consecutive covers since a 5-0 ATS run from Nov. 14-28.

The last time these teams met, Alabama picked up an 86-71 victory as two-point favorites on Jan. 5, 2021 in Tuscaloosa as the OVER cashed. That snapped a three-game win streak in the series by Florida, however. The last meeting between these teams in Gainesville was an epic battle, with the Gators outlasting the Tide 104-98 in overtime on Jan. 4, 2020. However, Bama has won two of its past three trips to G'ville.

Alabama has managed just a 3-7 ATS mark across the past 10 games on the road, while going 0-4 ATS in the past four games against teams with a winning overall record. It's all about the road team in this series, however, at least against the number, with the visitor going 20-5-1 ATS in the past 26 meetings in this conference matchup.

Florida is back on its home hardwood for the first time since a non-conference win over Stony Brook, 87-62. The Gators covered that day, and UF is 6-1 SU/5-2 ATS on its home floor. Remember, though, this is a team which inexplicably lost to a terrible Texas Southern team on Dec. 6 by a 69-54 score as 23.5-point favorites, so anything is possible. 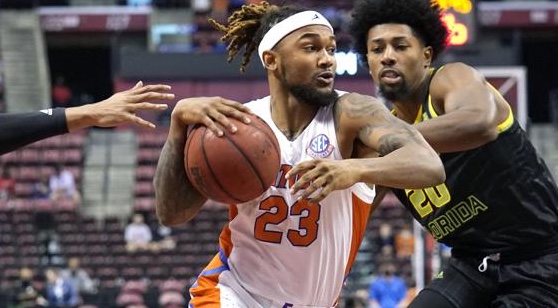 The Florida Gators have covered seven of the past nine games at home. (AP)

The ranked Tide head to Gainesville look for a cover. Florida was in this exact spot earlier in the season, underdogs at home against a previously ranked Florida State on Nov. 14. The Gators blasted the Seminoles by a 71-55 score as one-point 'dogs as the UNDER connected. Can we expect a similar situation here? Well, Florida has cooled off, going just 2-4 ATS across the past six games, while winning just three of the past six games overall. They're not the same team which we saw in that previously described situation vs. FSU.

Alabama has been on the court just one week ago, so there should be substantially less rust than Florida, which hasn't played in two weeks. Plus, the Crimson Tide won a difficult game against another ranked SEC team, Tennessee. The only concern here is that the last time the Tide traveled for a true road game, its only one so far this season, Alabama was roughed up by Memphis 92-78 on Dec. 14. The Crimson Tide is also just 3-2 SU/ATS in five neutral floor games, so they have been very ordinary on the road. Until Alabama shows they can beat above-average teams on the road, play the home side.