The Ole Miss Rebels (8-4, 0-0 SEC) travel to meet the Tennessee Volunteers (9-3, 0-1) for SEC action on Wednesday night at Thompson-Boling Arena in Knoxville, Tenn. Tip-off is scheduled for 7:00 p.m. ET, and the game can be viewed on SEC Network.

The Rebels are angry after getting tripped up at home Dec. 21 against Samford of the SoCon, not exactly the kind of opponent you'd expect to slay an SEC foe. The Rebels were 14-point favorites for that one, which is nearly the opposite line for this conference opener. It's been a rough go of it for the Rebs so far, as they were also touched up against Western Kentucky on a neutral floor back on Dec. 11. Two previous losses against Boise State and Marquette on neutral courts aren't nearly as bad, but Ole Miss really only has one good win, and that's against Memphis on Dec. 4 in Oxford. The win over Dayton Dec. 18 was nice, too, but cold water was splashed on those good feelings after turning around and getting dumped by the Bulldogs.

Ole Miss shot just 41% against Samford, or 26-of-64, while hitting just 29%, or 8-of-28, from behind the 3-point line. The good news is that the Rebs made their free throws, going a respectable 13-of-17, while posting just nine turnovers. But the inexcusable part, especially for a power-conference team, is that the Rebels were outrebounded, or in other words outworked, by the smallish Bulldogs by a 33-25 count. That just cannot happen.

The Rebels had two players enter the COVID protocol Tuesday, although head coach Kermit Davis said the team intends to play with a short bench, and it appears they'll have enough to play. To make matters more difficult for Ole Miss, G Jarkel Joiner is dealing with a lower-back injury and the team's leading scorer is a question mark.

Tennessee is in much better shape. Its two best players, G Kennedy Chandler and F John Fulkerson were previous out with positive COVID tests, but they have each ended up going through the protocol and are expected to return, putting Tennessee at or near full strength. The Vols were tripped up 73-68 at Alabama even without Chandler and Fulkerson, putting up a tremendous fight.

Believe it or not, this will be the first true road game for Mississippi so far this season. The best thing you can do is look to Mississippi's showings in neutral-floor games, and those showings weren't very good. They're just 1-3 SU/ATS in four neutral floor games, with a lone win over Elon, while losing to Boise State, Marquette and Western Kentucky. The UNDER is 3-0 in the past three neutral-site games, too, and 7-2 across the past nine games overall. With a short bench, and just enough scholarship players, the Rebels should have some difficulty scoring the basketball, perhaps leading to yet another UNDER result.

These teams met last season on Feb. 2 in Oxford, with the Rebels winning 52-50 as 3.5-point underdogs as the UNDER connected. However, the last time they met in Knoxville, it was Tennessee running away with a 73-48 win as 6.5-point favorites, as the UNDER also hit. In fact, the UNDER is 4-0 in the past four meetings, and eight of the past nine in the series. 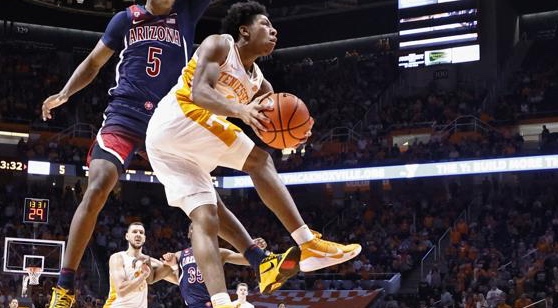 After missing the Alabama game due to COVID, Kennedy Chandler returns Wednesday vs. Ole Miss. (AP)

INSIDE THE STATS - OLE MISS REBELS

The Rebels are hurting and will be sucking wind trying to play with a short bench, as they continue to deal with COVID issues. But coach Davis said Tuesday that if the team has the minimum seven scholarship players at least one coach that they will trudge on and play. While that's admirable, it's a situation to take advantage of. However, how much you take advantage of the situation depends on the health of Joiner, the team's leading scorer. If he is able to play, go lightly on the Vols, but if Joiner is ruled out, go hard on the home side. At the time of publishing, several beat writers simply listed him as questionable, and there was no mention if he was one of the two players positive for COVID. That part is confirmed, that two players were positive Tuesday and will not play, but there were no specifics available.

The Volunteers hope that their COVID issues are in the rear-view mirror, as they welcome back the leading scorer Chandler, as well as the rebound machine Fulkerson. After playing shorthanded themselves, Tennessee is whole again and looking to grab that first SEC victory. This one could turn into a laugher if Ole Miss is missing Joiner, while playing with a bench of just two reserves.