The Gators were on the short end of an 83-70 setback on their home court on Thursday. Florida is now on an ugly 3-4 SU/2-5 ATS skid across the past seven games. Florida was just 42%, or 22-of-52, from the field, while turning it over 20 times. They'll need better discipline if they're going to turn things around on the road against another tough ranked team. The Gators were also an awful 64%, or 18-of-28, from the free-throw stripe. As usual, Colin Castleton was solid, going for 19 points with seven rebounds and a blocked shot, but he was one of just three players to hit double digits in points. Myreon Jones joined him in double digits, going for 11 points, but he was a dismal 4-of-14 from the field.

The Tigers trounced South Carolina in Columbia, winning 81-66 as an 8.5-point favorite, while hitting the OVER. It was Auburn's highest-scoring game since dropping 99 on Nebraska in a neutral-floor battle on Dec. 11. Auburn was a very efficient 53% from the floor, or 29-of-55, while going 6-of-13 from behind the arc. The Tigers also played a strong brand of defense, as Walker Kessler swatted four shots while grabbed 10 boards for the only double-double of the evening. Zep Jasper hit each of his triples, and Jabari Smith also hit a pair of 3-pointers.

Auburn is playing a lot better basketball lately, as Florida has really fizzled lately after a red-hot start. Look for the Tigers to keep up their strong play.

Florida fired out to a 6-0 SU/5-1 ATS start, and even had a spot in the Top 25 rankings at one point. This is a team which topped Florida State, California and Ohio State prior to Thanksgiving. It's all good downhill in a hurry, however, including a stunning loss to Texas Southern at home as a 23.5-point favorite on Dec. 6. Since flipping the calendar from November to December, and eventually to January, the Gators are 3-4 SU/2-5 ATS. The OVER has connected in three of the past four games, too.

For totals, Florida has hit the OVER in 10 of the past 14 games on the road, while going 3-1-1 in the past five games overall. The UNDER is 4-0 in the past four against teams with a winning overall record, however.

Auburn has won both of its conference games so far, and the Tigers covered in each of the outings, too. That includes a win over a ranked LSU team on Dec. 29 at home. In fact, both of Auburn's wins inside the SEC have been by 15 points each. Can Florida put up a better fight? It really hasn't shown any signs of doing so.

For totals, the UNDER is 4-1 in Auburn's past five games overall and 5-0 in the past five against winning teams, but the OVER is 11-5 in the past 16 games as a favorite, while going 9-4 in the past 13 as a home favorite.

These teams met last season on Feb. 23, with the Gators winning at Auburn Arena by a 74-57 count as 1.5-point favorites as the UNDER hit. In this series, that's been the rule, with the UNDER hitting in each of the past five meeting dating back to Feb. 24, 2018. Florida has covered three straight in this series, and seven of the past eight, too, so Auburn will have its work cut out despite the fact they're the much better team here. 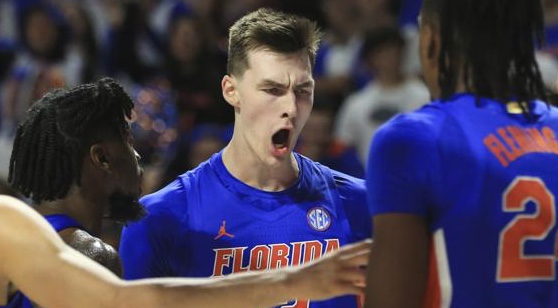 These are two teams heading in opposite directions. The Gators just haven't been the same since the kitchen still smelled like turkey and Thanksgiving dinner, while the Tigers have been playing very consistent basketball and look like one of the better teams in the SEC. Florida has won each of the past two meetings, and eight of the past 10 overall in this series, while going 7-1 ATS in the past eight in this series. But the worm is going to turn, and what better time for the Tigers to snap out of it in this series than with their best team in years?

The Tigers have covered three straight in this series, while going 8-2 ATS in the past 10 games overall. They're rolling right along, posting 70 or more points in nine straight outings, too. The Gators have been struggling, and facing a Tigers defense which allows just 64.3 PPG and 38.0% from the floor isn't going to be the elixir to cure their ills. Look for Auburn to keep it rolling at home.