The Cincinnati Bengals (10-6) travel to meet the Cleveland Browns (7-9) for a Week 18 matchup on Sunday at FirstEnergy Stadium in Cleveland. Kickoff is scheduled for 1:00 p.m. ET, and the game can be viewed on FOX.

The Bengals wrapped up the AFC North Division title last weekend with a victory over the Kansas City Chiefs, while the closest pursuers, the Baltimore Ravens and Cleveland Browns, each lost. Cincinnati heads into this game with a lot of steam, although QB Joe Burrow will rest in the regular-season finale. He banged up his knee near the end of his solid performance. In addition, the Bengals are dealing with COVID issues, so RB Joe Mixon and DE Trey Hendrickson are among the starters who will be sidelined after testing positive Wednesday. S Vonn Bell, LB Akeem Davis-Gaither, C Trey Hopkins and OG Quinton Spain will also be on the shelf after positive tests for the coronavirus.

With Burrow on the shelf, QB Brandon Allen will get the starting nod. Head coach Zac Taylor has said this week that star rookie WR Ja'Marr Chase is uncertain. Could he use rest after a long regular season? And is there anything to really gain by having him catch passes for Allen, rather than his usual QB Burrow? That might be the biggest question, but if he does play, I'd expect a cameo appearance, to perhaps a half of play maximum, if you're a prop bettor looking for info. Chase is just 12 yards short of setting the team's single-season receiving yardage mark, so that might factor into Taylor's decision to let him play.

The Browns will be without QB Baker Mayfield, as he will have surgery to repair a torn labrum in his non-throwing shoulder. The Bake Show tried playing through a bevy of injuries this season, while also missing time due to COVID issues. But with the team officially eliminated from playoff contention, QB Case Keenum will make the start, giving Mayfield a jump on recovery time heading into the offseason. Keenum started Oct. 21 in a Thursday night game against the Denver Broncos, a 17-14 victory.

Browns RBs Nick Chubb (ribs) and Kareem Hunt (ankle) are each uncertain due to injuries, and again, the team is out of the playoff hunt, so they likely won't be pushing to hard to play with nothing at stake. It could mean a steady diet of RB D'Ernest Johnson.

The Bengals head into this one on a three-game win and cover streak since a 26-23 overtime setback against the San Francisco 49ers in overtime back on Week 14. While all of that is well and good, it's sort of meaningless with Burrow and Mixon not expected to play this weekend, and Chase likely to only see minimal action. As such, don't put a ton of stock into the trends this week, although they do require mentioning.

The Browns won and covered as 1.5-point favorites when Keenum was last under center as a starter against the Broncos in Week 7, while the UNDER connected. The Browns are also 2-0 ATS with a pair of UNDER results in the two games without Mayfield under center this season.

Whomever has been under center for the Browns lately hasn't equated to very many points, as the Browns have 14, 22, 14, 24, 10, 13 and 7 across the past seven outings, which is an average of just 14.9 PPG during the span. The UNDER is 5-1 across the past six games, while the Browns are 2-5 ATS in that seven-game low-scoring stretch, too. 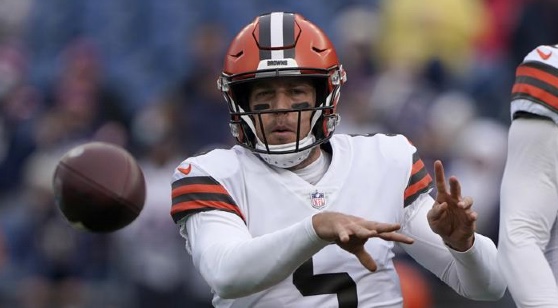 The Browns are just 3-11 ATS in the past 14 meetings vs. Bengals, although they covered in the first meeting this season. (AP)

INSIDE THE STATS - CINCINNATI BENGALS

INSIDE THE STATS - CLEVELAND BROWNS

With Burrow, Hendrickson, Mayfield and Mixon on the shelf, this game lost a lot of star power. However, there are still some very big names who will be on the field, including on the defensive side of the football. It's no surprise that this total has been on the move since the open, going from an open of 46 at some shops, to 37.5 or 38 as of Friday evening.

We're likely to see a lot of sloppy play, especially in the pass game, with defenses reigning supreme. However, guys like Samaje Perine for the Bengals, and D'Ernest Johnson for the Browns, are likely to shine as they get their chance to start and see a meaningful role, regardless of the situation. These guys want to get video and show what they can do. Still, that's the run game, and the run game means the clock runs, which UNDER bettors love.

However, playing the UNDER in a game in the 30's is risky business. The Browns are nearly touchdown favorites, and even if Burrow isn't playing, they barely beat the Denver Broncos on a Thursday with Keenum under center. The best play might be taking the AFC North champs, even without Burrow and Mixon.