Both of these teams have plenty at stake, so this figures to be a very entertaining battle. The 49ers are fighting just to get into the playoffs, and they need a win, or a Saints loss to the Falcons in Atlanta to get into the tournament. The Rams already have secured a berth in the playoffs, but they can lock up the NFC West Division title and No. 2 seed with a victory. The Rams can still win the West if they lose and the Arizona Cardinals also lose to the Seattle Seahawks. The Saints-Falcons, as well as Seahawks-Cardinals, all kick off at 4:25 p.m. ET like this game does.

The 49ers have won five consecutive meetings, including a 31-10 rout at Levi's Stadium in Santa Clara in the first meeting back on Nov. 15 as the UNDER connected. In that five-game win streak, San Francisco is 4-1 ATS, while going 7-3 ATS across the past 10 meetings. The UNDER has also cashed in three straight, and four of the past five in this series, even though the 49ers have scored 23 or more points in each of the past four meetings.

The 49ers picked up a 23-7 victory over the Houston Texans last weekend with rookie Trey Lance under center. After a slow start, he found his sea legs and did a good job in the second half. QB Jimmy Garoppolo is nursing a thumb injury, while OT Trent Williams (elbow) are each listed as questionable for Sunday's game. Lance indicated Friday that both quarterbacks have been splitting the first-team reps in practice this week, so that doesn't offer a lot of insight into who might start.

On the COVID front, starting DBs Jimmie Ward and K'Waun Williams remain on the reserve/COVID list, but could potentially be activated in time to bolster the secondary.

The Niners have covered three of the past four games overall, while going 6-2 ATS across the past eight outings. The 49ers are also 4-1 ATS in the past five as an underdog, but just 1-4 ATS in the past five against the NFC West. Of course, that lone cover came earlier in the season in the first meetings with the Rams.

For the Rams, they're riding high on a five-game win streak, although they failed to cover in Baltimore last week to snap a 4-0 ATS run. Still, the Rams have rattled off at least 20 points in six consecutive outings.

The Rams have cashed in four of the past five games overall, while hitting in five of the past seven against divisional opponents. Again, one of those non-covers came in the first meeting with the Niners. The Rams are also just 1-4 ATS in the past five against teams with a winning overall record, too. 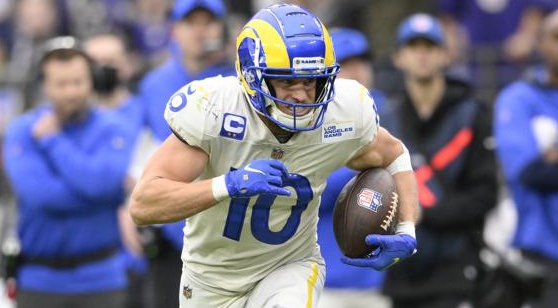 The Rams have covered in five of the past seven games against NFC West Division opponents. (AP)

INSIDE THE STATS - LOS ANGELES RAMS

There is some deep concern about Ward and/or Williams being available for Sunday's game less than 48 hours out. Even if the duo is able to return, how effective can they be against the high-octane Rams offense? Yes, the 49ers have dominated this series recently, winning five straight meetings while covering four of those wins. But the Rams are home, and playing for a division title. There are plenty of high stakes, higher than Los Angeles is usually playing for in this game. A lot of people don't trust Matthew Stafford on this stage, but really, we've never seen him in this position before to judge. It's not fair to blame him for the absolutely train-wreck seasons in Detroit exclusively, as he didn't put those rosters together, he was just one of the workers.

I think the Rams offense is humming along quite nicely, going for 20, 30, 20, 40, 37 and 28 points across the past six games. Mercurial WR Odell Beckham Jr. looked like he is back to himself after one, being healthy, and two, being in a pass-friendly offense as opposed to his time in Cleveland. The run game is also looking good for the Rams, and of course, the defense is championship-caliber. I don't think the Rams smash the 49ers to end their playoff bid, and San Francisco could still back in anyway if New Orleans wets the bed in Atlanta. But I think Los Angeles gets its first win in this series since Dec. 30, 2018, more than three calendar years ago.