The Tennessee Titans (11-5) travel to meet the Houston Texans (4-12) for a Week 18 matchup on Sunday at NRG Stadium in Houston. Kickoff is scheduled for 1:00 p.m. ET, and the game can be viewed on CBS.

The Tennessee Titans clinched the AFC South Division last weekend with an emphatic 34-3 victory over the previously red-hot Miami Dolphins. But they're not done yet. Tennessee can clinch the No. 1 overall seed in the AFC playoffs, and the only first-round bye, with a victory. It'll also have revenge on its mind, as the Houston Texans pulled off a giant upset in the rain in Nashville in Week 11, 22-13. The Titans were favored by 10.5 points in that game. Ironically, they are favored by the same amount heading into this season finale, the third consecutive season the Titans have wrapped up the season in the friendly confines of NRG Stadium.

The Titans lead this all-time series 21-18, but again, the Texans got the better of the favorites in the game in Nashville back in November. That snapped a three-game win streak by the Titans in this series, while the Texans hold a 4-2 ATS advantage across the past six. OVER bettors have also hit in three of the past four meetings in this series.

The Texans managed just 86 rushing yards and 136 passing yards in a 23-7 setback in San Francisco in Week 17. Houston will be a double-digit underdog for the third consecutive week, and sixth time in the past eight games. Houston has posted a 2-3 ATS mark in the past five as a 'dog of 10 or more points, winning two games outright against the Los Angeles Chargers in Week 16, and the Titans in Week 11.

The Titans have all of it in front of them. There is a lot of pressure, but they need to rise above it. They have to harness in all the good energy, block out the bad and feel the flow. It's circular. Tennessee has won two in a row since a disappointing loss in Pittsburgh in Week 15, and the Titans are 3-1 ATS across the past four games overall. The road hasn't been friendly lately, losing to the Steelers and the Patriots in the past two trips, failing to cover in each, while scoring exactly 13 in both of the outings. Ironically, 13 was exactly how many the Titans scored in the first game in Nashville against the Texans, so they won't be taking Houston lightly.

The Titans could get a spot of good news. RB Derrick Henry (foot) was designated to return from the reserve/Injured list this week. He was able to practice Thursday and Friday, and the team has until 4 p.m. ET Saturday to officially activate him if he is to play this weekend. There is a shot, although don't expect much more than a cameo to get him back into game conditions. The team certainly would like to win, and have two more weeks to get him back in to playing shape, while not risking some sort of a setback to his surgically-repaired foot.

The Texans have a poor record overall at 4-12 SU, but they're a respectable 3-4 SU in the previous seven games, with wins over two playoff hopefuls, the Titans and Chargers. They're anything but an easy out lately, as HC David Tully has this team playing hard despite the fact they've been mathematically eliminated for some time. 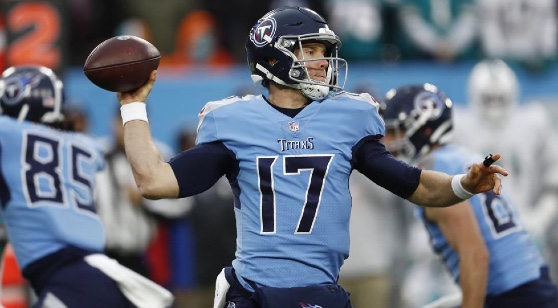 The Tennessee Titans are 1-6 ATS in the past seven trips to Houston. (AP)

INSIDE THE STATS - TENNESSEE TITANS

INSIDE THE STATS - HOUSTON TEXANS

The Titans have too much going for them heading into this regular-season finale. They're not going to take the rival Texans lightly despite an overall record of 4-12. Houston has been playing hard down the stretch, and the Texans have been very prideful. A lot of fans think that these games don't matter once a team is eliminated from the playoffs, and they're just playing out the string. But every game in the NFL is meaningful, and all of these players want to put down good video for jobs next season in Houston, or possibly elsewhere. It reflects well on the coaching staff that this team hasn't gone in the tank and continue to play hard to the bitter end.

That being said, I don't believe the Texans are able to pull off the regular-season sweep and run the hopes of the No. 1 overall seed for the Titans. However, I think the Texans definitely make the Titans work for it, and I never like taking road favorites laying double digits, regardless of the situation.