The Tigers are coming off an impressive 85-73 victory against Florida last time out on Saturday, covering an eight-point number. The 85 points were the scored since posting 99 in a neutral-floor game against Nebraska on Dec. 11. Auburn has won four straight while also covering four in a row, and that includes a perfect 3-0 SU/ATS record inside the SEC. The OVER has hit in each of the past two conference tilts against Florida and South Carolina, averaging 83.0 PPG while allowed 69.5 PPG.

The Tigers were a very efficient 54% from the field, or 30-of-56, while posting nine blocked shots, including two or more by three different players. Walker Kessler was his usual disruptive self, posting three swats while picking up six points, eight rebounds and an assist, too. Auburn won the rebound battle with Florida 33-28, making up for the fact the Tigers were minus-3 in the turnover department.

Auburn has won 11 consecutive games since its only setback in overtime on a neutral floor against UConn back on Nov. 24, falling 115-109 in that one. During the 11-game win streak the Tigers are also 9-2 ATS.

For totals, Alabama has been putting up the points lately. The OVER has connected in eight of the previous 10 games overall, while going 6-2 in the past eight as a favorite. The OVER is also 4-1 in the past five at home against teams with a winning road mark, too. 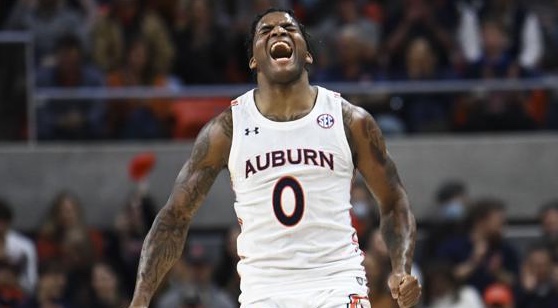 The UNDER is 5-2 in the past seven games for Auburn against winning teams. (AP)

The Crimson Tide sports fans could use something to be happy about following Monday's national championship game football loss to Georgia. It would be a little bit of a consolation prize if the Tide can hand the rival Tigers as second loss on the second. But, sorry Alabama fans, it ain't happening here, either.

Auburn has been humming right along, as the trio of Jabari Smith, K.D. Johnson and Wendell Green Jr. do the scoring, and Kessler locks it down in the paint, looking like a windmill at a miniature golf course with all of the rejections. The Tigers are going to add to the early-week woes for Alabama sports fans, grabbing the road victory in Tuscaloosa, as Bama continues to struggle. Since Dec. 14, this Tide team is just 3-3 SU/1-5 ATS, and showing no signs of winning or covering on a regular basis.