The polish has come off of the Cyclones a little bit, as they're coming off a 79-66 loss at Oklahoma on Saturday, not even coming close to covering a six-point number as the OVER connected. In fact, the 79 points allowed marked a season high, and was the most since yielding 79 in the Big 12 Tournament exit against, well, Oklahoma, on March 10, 2021. After an impressive 12-0 SU/8-4 ATS start to the season, which included solid wins over Oregon State, Xavier, Memphis, Creighton and Iowa, the Cyclones have struggled in conference play. Facing all ranked teams in the first three games against top-ranked Baylor, Texas Tech and on the road against Oklahoma will end up building character for the rest of the season. They face another character-builder here in Kansas, too.

The Jayhawks opened the conference schedule with a 74-63 road win against Oklahoma State on Jan. 4., but Rock Chalk fell inexplicably at Texas Tech on Saturday despite the fact the Red Raiders were playing without their top two leading scorers due to injuries. The Red Raiders still rolled to a 75-67 win as seven-point underdogs, as the Jayhawks shot just 45%, or 21-of-47 from the field. Kansas turned it over 17 times to just 11 for TTU, and the Jayhawks were outrebounded 31-22. Ochai Agbaji did his best to help KU avoid an upset, hitting 7-of-12 from the floor, including 6-of-9 from behind the 3-point line, but his 24-point effort wasn't enough.

So both of these teams are looking for a little redemption, and they're looking to avoid a two-game losing skid in the process. We should get a much better defensive effort on both sides of the ball, so watch the UNDER closely.

Iowa State heads into this one just 1-2 SU, while failing to cover each of the past two outings. The last time the Cyclones failed to cover three or more in a row was an 0-3 ATS run from Feb. 27-March 4 last season, in the midst of a 18-game losing streak to close out the campaign.

This season has been like night and day compared to last season's disappointing campaign, although Iowa State is just 1-4-1 ATS in the past six games following a straight-up loss. However, unlike last season, the Cyclones are a solid 4-1-1 ATS in the past six when following up a non-cover. In addition, Iowa State has posted a solid 7-2 ATS mark in the past nine games against teams with an overall winning mark, playing teams above .500 with a lot of intensity. They're 1-1 ATS in two true road games this season, although they lost last time out at Oklahoma in the latest test away from home.

For totals, the Cyclones have cashed the OVER in seven of the past 10 games overall against teams with a winning overall record, while going 3-1 in the past four games overall. And for the past few seasons, the OVER has been common on the road for I-State, going 44-21-1 in the past 66 games away from home. The OVER is also 20-9 in the previous 29 games following a straight-up loss.

Kansas hasn't had a lot of success at "The Phog" lately, at least against the number when a winning team visits. The Jayhawks are 0-4 ATS in the previous four home outings against teams with a winning road record. Overall, KU has alternated non-covers and covers across each of the past six outings, including non-covers at home against George Mason on Jan. 1 and Stephen F. Austin on Dec.18.

In the past five meetings, the favorite has cashed on all five occasions, including 4-0 SU/ATS for Kansas dating back to the last Iowa State win and cover on March 16, 2019. Kansas is averaging 93.0 PPG in the past two home games against Iowa State, and the OVER is 7-3 in the previous 10 meetings overall, including 6-0 in the past six meetings in Lawrence. 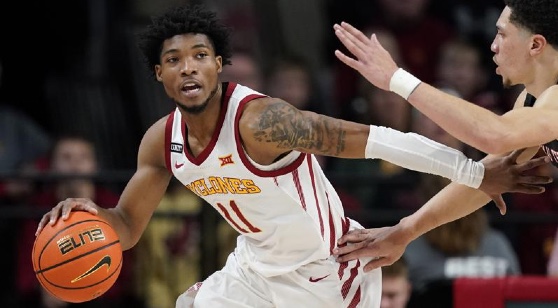 Iowa State has posted a 7-2 ATS record against teams with a winning overall record. (AP)

The favorite has dominated this series lately, going 5-0 ATS in the previous five meetings, including four straight wins and covers by the Jayhawks. When Kansas gets Iowa State at home, it's usually a high-scoring game, too, with the OVER connected in each of the previous six battles at Allen Fieldhouse. The Jayhawks are going to be especially perturbed after their recent road loss to an undermanned Texas Tech, and they'll definitely be prepared and looking to fire out to a hot start here.

The Cyclones were snowed under by the Sooners last time out, and we're still trying to get a sense of where this team is at in terms of the Big 12. In three games against the top competition in the conferenced, Iowa State was really in just one of those games against Texas Tech. And the Red Raiders weren't at full strength for that one. This is a team which lost a lot of games last season, and with the exception of some decent non-conference victories, Iowa State's ranking might be a little higher than their overall play at the moment. I still think double digits is quite a bit for Kansas to be favored over a fellow ranked team, but I could also see this one getting away from Iowa State, as they're not quite as deep as the Jayhawks.

Go lightly on Iowa State with the points, while the OVER is your better play.