Providence bounced back from its first conference loss of the season at Marquette last Tuesday with a solid 83-73 win over St. John's as 3.5-point favorites as the OVER cashed. The 83-point outburst was the most for the Friars since going for 85 points in a victory over St. Peter's during the non-conference portion of the schedule back on Nov. 27. It also tied the most points scheduled inside the Big East for Providence since going for 95 points in an overtime win against DePaul on Dec. 27, 2020. The 83 points were the most in regulation in a conference game since a 93-point effort in a blowout of DePaul on March 7, 2020.

Creighton is likely to be very angry after a brutal showing at Villanova last time out on Wednesday. The Bluejays topped the Wildcats 79-59 in Omaha on Dec. 17, but the Wildcats returned the favor by a 75-41 count in Philadelphia. The Bluejays looked like they were shooting at a basket with a lid for most of the night, hitting 36%, or 16-of-45, from the field, including an absolutely brutal 3-for-24 (12%) shooting night from behind the arc. Villanova turned it over just five times to 15 for Creighton, and Villanova also won the rebounding battle 34-22. It was a game Creighton likely would like to burn all video evidence and just move on to the next game.

The Friars failed to cover in a straight-up loss at Marquette on Jan. 4, getting dusted 88-56 as one-point favorites. They bounced back with the cover against St. John's, and despite that rout against the Golden Eagles, Providence has still covered four of its past five games, and eight of its past 10. In fact, Providence hasn't had non-covers in consecutive games all season.

Providence won last season's meeting in Omaha, taking a 74-70 decision on Jan. 20, 2021, avenging a loss at the Dunkin' Donuts Center on Jan. 2, 2021 to the Bluejays, 67-65. Providence has covered four straight in this series, with the UNDER cashing in each of the previous three meetings.

For totals, it's all UNDER all the time. The UNDER is 6-2 in the past eight games overall, while going 13-3 in the past 16 games against teams with a winning overall record.

The Bluejays are hoping the fifth time is a charm, as they're 0-4 ATS in the previous four meetings with the Friars, while going 2-6 ATS across the eight meetings overall in this series. The UNDER is also 7-3 in the previous 10 battles in this Big East series. 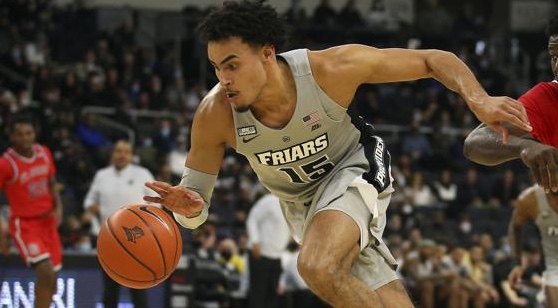 Providence has posted an 8-2 ATS record across the past 10 games overall. (AP)

INSIDE THE STATS - PROVIDENCE FRIARS

Can Providence shut down the triumvirate of Ryan? The three-headed Ryan machine? Whatever you want to call the trio of Ryan Hawkins, Ryan Kalkbrenner and Ryan Nembhard, the top three leading scorers for Creighton at 12.1 PPG or more per game. There the only team in the country with its top three scorers sharing the same exact first name. So Creighton has that going for it.

While that's rather consistent, they're just too erratic on the court for my liking. Creighton is 3-3 SU/ATS across the past six outings, falling at home to Iowa State and Arizona State during the stretch. Whenever this team is pushed just a little bit, the Bluejays seem to fold. Providence is solid in the frontcourt with Noah Horchler and Nate Watson, while the backcourt is strong with Aljami Durham and A.J. Reeves. However, the latter is doubtful to play due to a finger injury, and that could affect the chemistry of the Friars in this conference road battle.

I think it comes right down to the end, with the Friars getting it done against the number for the fifth consecutive time in a low-scoring battle. It might be best, whichever way you choose to lean, to play the money line rather than bother with the points here.