The Red Raiders stroll into the Ferrell Center with a 75-67 win over Kansas last time out as seven-point underdogs, bouncing back from a narrow loss and cover at Iowa State in a low-scoring game. It's a gauntlet for Texas Tech, facing three consecutive ranked foes, but it's a test which will have the Red Raiders come out stronger in the end, no matter how this one goes. TTU hit 51% from the field in Saturday's game in the wild setting at United Supermarkets Arena, hitting 28-of-55, while turning it over just 11 times. The Red Raiders were able to top the Jayhawks despite the fact they hit just 4-of-16 (25%) from behind the arc, while going a dismal 15-of-22 (68%) from the charity stripe. But KU turned it over 17 times, and Texas Tech outrebounded Kansas 31-22.

The top-ranked Bears rolled by TCU in Fort Worth by a 76-64 score as 10-point favorites, pushing against the total at most shops. That stopped a 5-0 OVER run for Baylor, with the cover snapping an 0-3 ATS skid for the Bears. Baylor shot an efficient 53%, or 30-of-57, from the floor, while also jacking up 13 successful triples on 27 attempts, good for a 48% mark from downtown. If you can pick on one area, it was Baylor's ugly 43% mark from the line, hitting just 3-of-7, but the Bears also turned it over just 12 times to 17 for TCU. Surprisingly, the Horned Frogs also outworked the Bears on the glass for a 28-27 end in rebounding.

Texas Tech has covered back-to-back games, but it hasn't yet covered three in a row at any point this season. The last time the Red Raiders cashed against the number in three straight was Feb. 27-March 4 last season, all at home. The last time Texas Tech had covers in three or more consecutive games involving at least one road game was March 2-9, 2019 to close out the regular season that year.

The Red Raiders have struggled against the number on the road, going just 2-8 ATS in the past 10 games away from home. They're also a dismal 2-6 ATS in the past eight road outings against teams with a winning home record, for which the Bears obviously qualify. And, for what it's worth, they have a case of the Tuesdays, too. Texas Tech is just 3-10 ATS in the past 13 games played on a Tuesday, if you likely wacky, circumstantial trends like that.

The OVER result against Kansas on Saturday was a rarity, as the UNDER has hit in the six prior games since. The UNDER is also 4-1 in the past five on the road against teams with a winning home record, while going 4-0 in the past four following a straight-up win, too. The UNDER is 14-6 in the previous 20 following a cover, too.

The Bears stopped a season-high three-game non-cover skid with their win at TCU on Saturday. Prior to the 0-3 ATS slide they had covered five straight from Nov. 26-Dec. 20, including victories over Michigan State, Villanova and Oregon.

Baylor heads into this one with a 10-3 ATS mark across the past 13 games at Ferrell Center, its home floor, while going 14-5-1 ATS in the previous 20 games overall. They're also a whopping 36-16 ATS in the past 52 when facing a team with a winning overall record. And when following a straight-up win, and there have been a lot of them lately, they're 14-4-1 ATS in the past 19.

As far as the totals are concerned, Baylor has cashed the OVER in 17 of the past 22 games at home, while going 21-8-1 in the past 30 games overall. The OVER is 3-0 in the past three meetings against the Red Raiders in Waco, too, while the Bears have cashed in three of the past four meetings, and five of the past seven head-to-head meetings overall. 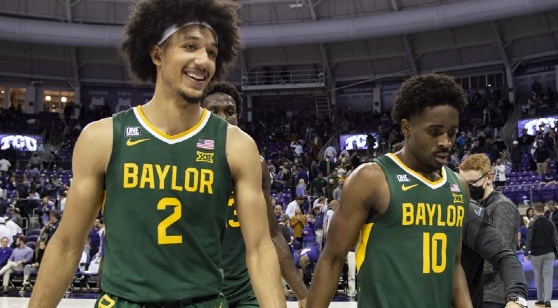 Baylor has covered three straight at home, and five of seven overall, against Texas Tech. (AP)

I'd feel a lot better about the prospects for an upset if Texas Tech had leading scorer Terrence Shannon Jr. available, but he has been sidelined since Dec. 14 due to debilitating back spasms. His return is uncertain at this point. Toss in the fact second-leading scorer Kevin McCullar did not play in the Kansas game due to an undisclosed ailment, and one, it's a wonder the Red Raiders topped the Jayhawks, and two, they haven't a prayer to drop the Bears if he cannot go.

Baylor is going to be at full staff for this one, while Texas Tech is hurting. And the game is in Waco, which makes matters worse for the Red Raiders. Even shorthanded, like it did against Kansas, Texas Tech could rally around each other and feed off the crowd. That isn't going to happen Tuesday, and with no TSJ, and perhaps no McCullar, either, the Red Raiders might get run right out of the gym. If that does happen, don't write this team off and understand the circumstances for later games when they're a good value. However, take advantage here and roll with the home side and a likely UNDER result.