The Duke Blue Devils (12-2, 2-1 ACC) travel to meet the Wake Forest Demon Deacons (13-3, 3-2) in a conference showdown at the Lawrence Joel Veterans Memorial Coliseum on Wednesday night in Winston-Salem, N.C. Tip-off is scheduled for 7 p.m. ET, and the game can be viewed on ACC Network.

The Blue Devils are looking to rebound from a stunning loss at Cameron Indoor Stadium against the Miami Hurricanes last time out, as Duke fell 76-74 as 15-point favorites. The Blue Devils weren't bad offensively, hitting 46% from the field, or 27-of-59, while hitting at a 29% clip from behind the arc, or 6-of-21. And the Blue Devils were solid from the charity stripe, knocking down 82%, or 14-of-17, from the free-throw line. Duke also snagged 41 rebounds to just 27 for Miami. So how did the Blue Devils lose by a bucket on their home floor? Turnovers. Duke coughed it up 17 times, while Miami was super careful with the basketball, committing just five turnovers. That was the difference.

Wake was also bitten by Miami on New Year's Day, falling 92-84 in South Florida, falling to 1-2 inside the ACC at the time. The Demon Deacons have bounced back with a pair of conference wins at "The Joel", bagging Florida State 76-54 on Jan. 4, and topping Syracuse 77-74 in overtime on Saturday. Despite the fact that game against the Orange couldn't be decided in regulation, the game still cashed the UNDER. Wake rolled for 11 threes, as the Deacs played with a short bench in that one. Four players had at least two triples, and Wake was able to scratch out the win despite the fact Syracuse outrebounded it 42-36, while committing just eight turnovers to 13 for the Deacs.

Wake is going to be facing an angry Duke side, and it will be interesting to see G Daivien Williamson is able to return from an undisclosed ailment. If the Deacs are to pull off the surprise, it will need all hands on deck.

The Blue Devils have failed to cover last time out, and Duke is 0-2 ATS across the past two outings. The last time Duke failed to cover three in a row was the final three games of the regular season, all straight-up losses, from Feb. 27-March 6, 2021.

Duke has failed to cover in 12 of the past 17 games on the road, including going 4-11 ATS in the past 15 road games against a team with a winning home record. The good news is that the Blue Devils are 3-1-1 ATS across the past five games after a non-cover.

For totals, the OVER is 5-1 in the past six games against teams with a winning overall record. The OVER is also 6-2 in the past eight following a straight-up loss, and 7-3-1 in the past 11 gam,es after a non-cover.

Wake heads into one with a 2-4 ATS mark across the past six games overall, although the Demon Deacons are 6-2 ATS across the past eight games at home. They failed to cover last time out as four-point favorites in a 77-74 OT win against Syracuse.

Duke swept Wake in the season series in 2020-21, but you only need to look to Feb. 25, 2020 for the last win by the Deacs in this series, an epic 113-110 victory in double-overtime as 11-point underdogs. The Demon Deacons also hold a slight 3-2 ATS edge in the previous five meetings, while splitting 5-5 ATS across the past 10. However, Duke has won nine of those 10 matchups. The OVER is also 4-0 in the previous four meetings in the series. 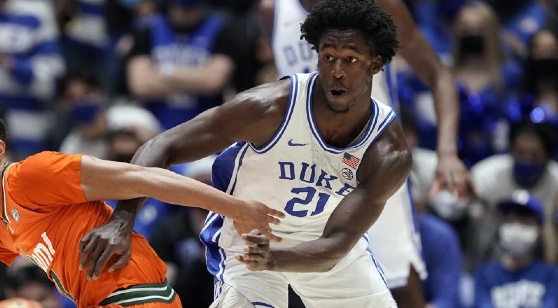 Duke has covered just five of its past 17 games on the road. (AP)

One of the best games I've ever attended was at "The Joel" back in 2009, when then-No. 1 Duke visited to face then-No. 4 Wake Forest. Al-Farouq Aminu, James Johnson and Jeff Teague outdueled Gerald Henderson, Jon Scheyer and Kyle Singler that day in what was the loudest crowd I've ever heard. And I've been to quite a few venues all across North America, from hockey in NHL arenas in Canada, to NBA games in the states, playoff games, NASCAR, etc. Then the head coach of Wake, Dino Gaudio, rode into the arena on a motorcycle to send the crowd into a frenzy. That night, it was absolute bedlam, and I loved it, even if I had no horse in the race and was just there to drink it all in and catch a good game. I still remember that 13 years ago, and it was one of the last times Wake was actually relevant, as it has been a hard decade. That's all changing, however, as head coach Steve Forbes looks to have the Deacs pointed in the right direction, and Alondes Williams might be the next great Deac.

I am a little concerned about Wake's depth, especially if Williamson is unable to participate. Duke has no problem with depth, and they're coming into this one angry, focuses and healthy. That's not a good mix for the Deacs.