The Tigers won their first 12 games this season, but there were questions on whether or not they had really played anyone, or just a bunch of cupcakes. The questions intensified from the doubters, as Auburn put it on LSU on Dec. 29. LSU stumbled out of the chute, falling behind 18-1, and the visiting Tigers never recovered, losing 70-55 as a 4.5-point underdog. With two home games against ranked teams looming against Kentucky and Tennessee, we were going to find out if the Tigers were championship-caliber, or paper tigers. After a 65-60 win over Kentucky, and a 79-67 whitewashing of Tennessee, LSU has answered those questions loudly. They're for real.

Florida fired out to a 6-0 SU/5-1 ATS record, and the Gators found themselves in the Top 25 rankings around Thanksgiving. Since flipping the calendar from November to December, the Gators have been in freefall. Florida is just 3-5 SU/2-6 ATS across the past eight games overall, including losses in the past two games to Alabama and Auburn. It won't get any better against another ranked team.

LSU rolls into this one with victories against a pair of ranked teams at home, covering in each outing. It's also 12-3 ATS in 15 games overall this season. This will be just the third true road game for LSU, and so far they've split those games with a win and cover at Georgia Tech on Dec. 11, while falling at Auburn on Dec. 29.

Florida won the most recent meeting last season, posting an 83-79 victory in Gainesville as a 2.5-point favorite, and it has won three of the past four while going 4-0 ATS in the previous four matchups. The road team is 5-2-1 ATS in the past eight meetings in this series, however.

For the total, the OVER is an impressive 4-1-1 in the past six games for the Gators, while going 3-1-1 in the past five games as a favorite, too. The OVER has also cashed in six consecutive games against teams with an overall winning record.

In this series, the OVER has cashed in six consecutive meetings dating back to Feb. 7, 2018, while going 8-1 in the previous nine meetings in this series. 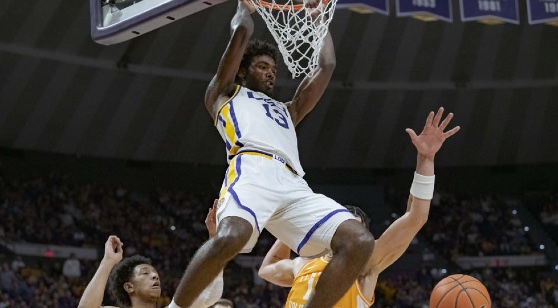 These are two teams going in completely opposite directions. After a pair of victories against top-tier teams, the Tigers are looking like a team poised to go deep into the NCAA Tournament. On the flip side, unless the Gators start to turn things around, they might be poised for a deep run in the tournament, too - the NIT Tournament.

Facing LSU could be just the elixir to cure the ills for Florida, as the Gators have won three of the past four in this series, while going 6-2 SU/6-1-1 ATS in the previous eight in the series. But the way they're going, a visit from the Tigers might be too much. LSU's depth will be tested, however, as Xavier Pinson left the Tennessee game due to a sprained medial collateral ligament and bone bruise. He is a big question mark for this one.

Colin Castleton is a beast for the Gators, but he cannot do it all. As such, Florida is 0-2 to start the SEC scheduled for the first time since 2009-10. LSU is going to have to band together with Pinson on the shelf, but even one starter down it should have enough for the scuffling Gators.