The Minnesota Golden Gophers (10-3, 1-3 Big Ten) travel to meet the Michigan State Spartans (13-2, 4-0) in a Big Ten conference clash on Wednesday at Breslin Center in East Lansing, Mich. Tip-off is scheduled for 7:00 p.m. ET, and the game can be viewed on Big Ten.

The Golden Gophers have dropped two straight games heading into this one, and it's not that they lost, but how they lost. Minnesota resumed play Jan. 4 at home against Illinois after the holiday break and COVID pause, falling to the Fighting Illini by a 76-53 score as 6.5-point underdogs as the UNDER connected. The Gophers were back at it at Indiana on Sunday, and Minnesota was dumped 73-60 as 11.5-point underdogs. That's two straight losses by an average of 18.0 PPG, and they're in the midst of an 0-3-1 ATS skid dating back to Dec. 11 at Michigan.

These teams met in the Twin Cities back on Dec. 8, too, with the Spartans coming away with a 75-67 victory as seven-point favorites as the OVER (135.5) connected. Michigan State has dominated this series lately, at least against the number, covering six of the past seven meetings. Minnesota won last season's meeting in the Twin Cities by an 81-56 score, but lost in East Lansing by a 70-52 count on Jan. 26, 2020. The OVER hit in the first meeting this season, but the UNDER is 8-1 across the past nine meetings.

While Minnesota hasn't won or covered in each of the past two, the Gophers haven't had three consecutive ATS losses since going 0-7 ATS in the final seven games of the regular season from Feb. 14-March 6 last season.

Sparty won last time out against Nebraska, but it failed to cover in a 79-67 victory as 15-point favorites at home. Still, since losing to Baylor back on Nov. 26 on a neutral court, Michigan State has rattled off eight consecutive outings. They're also 5-3 ATS in the past eight contests. That includes the win at Minnesota on Dec. 8, covering a seven-point number in the eight-point victory.

Michigan State shot just 47%, or 25-of-53, from the field against Minnesota in the first meeting, dropping in 10 3-pointers while hitting 48% from behind the arc. The good is that Michigan State also used its size to push around Minnesota, outrebounding the Gophers 41 to 24, the biggest difference. That rebounding edge negated the fact Michigan State turned the ball over 13 times to just twice for Minnesota. Three players tied for the most points with 15, led by Tyson Walker, who was a very efficient 5-of-7 with five rebounds, three assists and two triples.

On totals, the OVER is 3-1-1 in the previous five outings at Breslin Center, while going 5-2-1 in the past eight outings. However, the UNDER is 20-7 in the past 27 games against teams with a winning overall record. 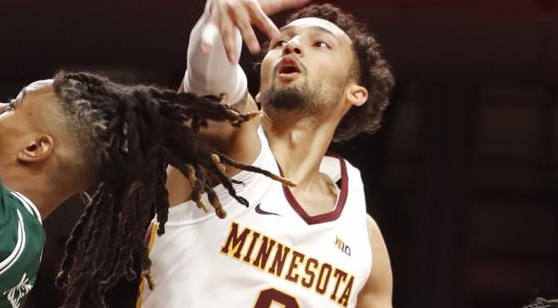 The OVER has cashed in five of the past seven games overall for Minnesota. (AP)

INSIDE THE STATS - MINNESOTA GOLDEN GOPHERS

Minnesota put up a good fight in the Twin Cities in the first meeting, but eventually ended up losing by eight points to just miss the cover. Since, they've gone into a tailspin, with the Golden Gophers losing and failing to cover in the past two games by an average of 18.0 PPG. They're showing no signs of snapping back onto the rails.

Meanwhile, Michigan State is rolling right along, winning eight straight outings, while going 4-2 ATS in the past six contests. The OVER is 5-2-1 during the eight-game win streak for Sparty, while the OVER is 5-2 across the past seven contests for the Golden Gophers. Look for Michigan State to grab the cover late in the second half, with the OVER inching across the finish line late.