The Villanova Wildcats (11-4, 4-1 Big East) travel to meet the Xavier Musketeers (12-2, 2-1) for a Big East conference battle Wednesday at the Cintas Center in Cincinnati, Ohio. Tip-off is scheduled for 6:30 p.m. ET, and the game can be viewed on FOX Sports 1.

After a couple of ugly, lopsided losses at Baylor and at Creighton on Dec. 12 and Dec. 17, the Wildcats have bounced back with four consecutive wins and covers, and it all started with a 71-58 home victory against Xavier on Dec. 21. In that game, superstar Collin Gillespie was a tremendously efficient 7-of-11 to end up with 15 points, four assists, two rebounds and two steals. He was one of four players to go for 15 or more points on a day when just eight players were available for the Wildcats. 'Nova ended up hitting 49% from the field, or 27-of-55, while hitting 29%, or 6-of-21, from behind the 3-point line. Villanova struggled at the free-throw line, hitting 11-of-17, but the 'Cats took good care of the basketball with just seven turnovers.

In that game, the Musketeers hit just 40%, or 21-of-52, while hitting 26%, or 6-of-23, from behind the arc. Star Paul Scruggs ended up hitting just 2-of-10 from the floor, finishing with only six points, although he did snag seven rebounds. However, he also turned it over three times, accounting for 25 percent of the miscues. XU had just two scorers to go for double digits in a forgettable performance.

After a COVID pause since that loss at Villanova on Dec. 21, the Musketeers returned to action Jan. 7 at Butler, winning 87-72 while covering a 6.5-point spread as the OVER connected. Scruggs was much better, too, going for 16 points, seven rebounds, six assists, a steal and a blocked shot, while the Musketeers had four scorers go for 10 or more points.

The Wildcats roughed up DePaul in Illinois by a 79-64 count as 10-point favorites, rattling off four straight wins and covers since a blowout loss at Creighton on Dec. 17. Villanova's four-game cover streak is tied for its longest since a 6-0 ATS run from Jan. 13-Feb. 3, 2019, a streak which also included a win over Xavier.

For totals, the UNDER has cashed in seven of the past 10 games overall, while going 4-1 in the past five against teams with a winning overall mark. The UNDER is 5-2 in the past seven following a straight-up victory, too.

The good news for Villanova side bettors is the fact the favorite has cashed in 14 of the past 18 meetings. But be careful, as the home team is also 9-4 ATS in the past 13 meetings.

After a holiday and COVID break, the Musketeers were back in action after a length hiatus from Dec. 21 to Jan. 7. Xavier posted an 87-72 win as 6.5-point favorites, snapping a two-game non-cover streak. XU is still 7-2 ATS across the past nine games overall, and 12-3 ATS over the previous 15 outings. However, one of the rare non-covers was against Villanova on the road Dec. 21. 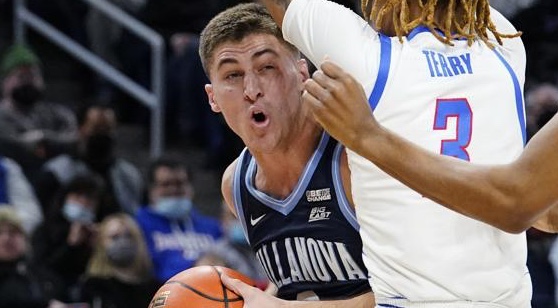 Villanova has cashed in each of the past four games, including the first meeting vs. Xavier. (AP)

Recollection of the first meeting is still rather fresh, as Villanova just topped Xavier Dec. 21. That game was at home, however, and it's never easy to win in the Cintas Center. Just ask Marquette, Cincinnati and Ohio State, three of the more notable victims in nine consecutive home victories to open the current season for Xavier.

Villanova has won four consecutive meetings in this series since Xavier's most recent win, Feb. 24, 2019, in Cincinnati. The Wildcats have covered three straight meetings, and eight of the past 10 meetings overall, too. As far as the total, the UNDER has hit in each of the past three meetings, and seven of the past 10 overall in the series. It's not going to be easy, but Villanova will hand Xavier a narrow loss at Cintas Center, with the UNDER just coming in. But both wagers are worth small-unit plays only.