The Buckeyes bounced back after its 67-51 loss at Indiana to top Northwestern by a 95-87 count last time out as 7.5-point favorites in Columbus. In fact, the 95-point outburst was the highest scoring output of the entire season after a season-low against the Wildcats.

Ohio State was accurate from the field against Northwestern, hitting a robust 57%, or 29-of-51, from the field, while knocking down 11-of-25, or 44%, from behind the 3-point line. The Buckeyes were also amazing from the free-throw line, good for 26-of-27, a sparkling 96%. Malaki Branham actually missed the only free throw in that Northwestern game, but he made 13-of-14, while finishing with 24 points, five assists, four rebounds and three steals, so he was probably excused by the coach. And star E.J. Liddell amassed 34 points on 12-of-20 shooting, including five makes from behind the arc.

Wisconsin is on a roll, posting five consecutive victories since Dec. 11 at Ohio State. The Badgers were on the short end of a 73-55 score in Columbus against the Buckeyes in the first meeting of the season. In that loss, the Badgers shot just 34%, or 22-of-65, while hitting just 23%, or 6-of-26, from downtown. The good news is Wisconsin turned it over just eight times, but the bad news is that Ohio State outrebounded them by a whopping 47 to 25 margin.

The Buckeyes picked up a cover last time out against Northwestern, but they have posted back-to-back covers just once this season, on Nov. 30-Dec. 5 against Duke and Penn State. Overall, Ohio State has posted a 6-7 ATS mark in 13 games this season.

The Buckeyes have cashed the OVER in nine of the past 12 games overall, while going 16-5 in the past 21 games on the road. In addition, the OVER is 6-2 in the past eight against teams with a winning overall record. While that's all well and good, the UNDER hit in the first meeting with the Badgers on Dec. 11 before the COVID pause and holiday break.

The Badgers have picked up five straight victories since losing to the Buckeyes on Dec. 11, including a 70-69 road win at Maryland last time out on Sunday. The Badgers have covered three in a row after an 0-3 ATS skid from Dec. 11-29.

In rather uncharacteristic fashion, Greg Gard's Badgers have cashed the OVER in five consecutive games, while going 9-3 across the past 12 outings overall. Unlike Ohio State, Wisconsin has been able to stack covers, going 7-1 ATS in the past eight following a cover, and 8-2 ATS in the previous 10 following a straight-up win. They're also 9-3 ATS in the past 12 games against teams with a winning overall mark.

The Badgers have also cashed the OVER in seven of the past nine against teams with a winning overall record, while going 5-1 in the past six games at home, too. 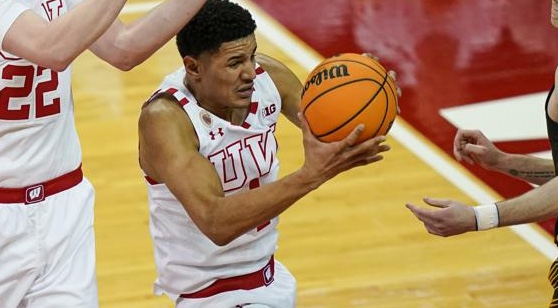 Wisconsin has cashed in nine of the past 12 games overall. (AP)

The Buckeyes gave the Badgers a sound beating in the first meeting in Columbus, but Ohio State has been a completely different team on the road. They're just 2-2 SU/1-3 ATS in four true road outings, including an ugly 16-point loss at Indiana with a season-low 51 points last time it packed a suitcase on Jan. 6.

After the loss in Columbus, Wisconsin appears to have gotten the wake-up call it needed. The Badgers have rattled off five consecutive victories, and three straight covers while hitting the OVER in each of the outings. They're playing tremendous basketball, and Wisconsin will return the favor to level the season series. Perhaps they'll meet in the Big Ten Tournament in the spring to decide a season series winner.