After a 64-51 loss at Oklahoma State last Saturday, the Longhorns rebounded with a 66-52 victory at home against Oklahoma on Tuesday night, covering a seven-point number as the UNDER connected. The shooting was just a little off, hitting 47% from the field, or 22-of-47, while hitting just 29%, or 4-of-14, from behind the 3-point line. The Longhorns were just OK in the free-throw department, connecting at a 75% clip, or 18-of-24. Andrew Jones led the way with 22 points and four steals, also hitting a pair of 3-pointers. Christian Bishop was the top glass cleaner with eight boards, while also contributing 10 points, one of four scorers in double digits.

The Cyclones just missed out on an upset at Kansas, falling 62-61 in Lawrence. Iowa State has lost two in a row, and three of its past four, all inside the conference. The Cyclones probably didn't deserve to win, hitting just 41%, or 24-of-59, while struggling with a 64%, or 7-of-11, from the free-throw line. They also turned it over 12 times, but the good news is that Kansas coughed it up 16 times. After a 12-0 SU/8-4 ATS start, including non-conference wins over Iowa, Memphis and Xavier, things have gone downhill in a hurry for the Cyclones in conference play.

The Longhorns ailed to cover at Oklahoma State last Saturday, but they're still 4-1 ATS across the past five games overall after an 0-4 ATS skid from Dec. 9-22, all out of conference games. They're 3-1 SU/ATS in four Big 12 games, splitting the OVER-UNDER 2-2 in those four league outings.

The UNDER has connected in each of the past two games, while going 7-2 across the past nine games overall. On the road and in neutral-site games, the UNDER is 3-1 across the past four outings.

In the most recent meeting in Ames, the Longhorns came away with an 81-67 victory as 12-point favorites on March 2, 2021. Texas has won four of the past five in this series, while holding a 4-2 ATS advantage in the past six meetings, and a 7-3 ATS lead across the past 10 in the series. The OVER has hit in five consecutive meetings between these teams.

The Cyclones came oh-so-close to upending Kansas last time out, falling by one point in Lawrence. Isaiah Brockington led the way with 17 points and eight rebounds while connecting on 6-of-15 from the field. Gabe Kalscheur was bombs away with four triples on nine attempts from behind the arc, ending up with 14 points.

Iowa State started off hot, posting 12 straight victories to start, going for covers in eight of those outings. The non-conference schedule wasn't terribly challenging, although the Cyclones did face the likes of Creighton, Iowa, Memphis and Xavier, teams which should contend for a spot in the NCAA Tournament. The trouble started for the Cyclones in the conference portion of the schedule, going 1-3 SU/2-2 ATS in four league games. The UNDER has cashed in two of the past three, including the near-miss at Kansas.

The one thing Kansas does really well is hold down the opposition, allowing just 58.6 PPG to rank 16th in the nation, while opponents are hitting threes at just a 26.5% clip. That makes Iowa State seventh in the country in perimeter defense. Texas isn't very good on triples, hitting just 33%, to check in 218th in the nation. 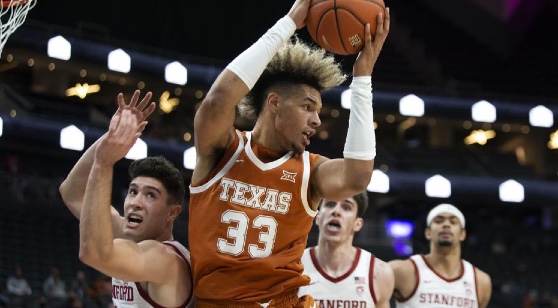 The OVER has connected in each of the past five meetings between Texas and Iowa State. (AP)

We know a couple of things for certain about these two teams. Both sides have a couple of skilled players, but they're maddeningly inconsistent. In addition, both teams are very good defensive teams, so points should be at a premium in Ames on Saturday.

Texas has won four of the past five meetings in this series, and while the Longhorns have struggled at times on the road, I just don't trust Iowa State. The Cyclones were horrible last season, but surprised in the non-conference schedule, coming out of nowhere to find early success and a ranking. However, since starting the conference schedule, we're finding out that Iowa State is just not that good. They'll slow it down, trying and use suffocating defense to win games, and they'll be better than last season. However, Texas has just a little more depth, and I think they'll win this defensive battle by a couple of buckets.