The San Francisco 49ers (10-7) travel to meet the Dallas Cowboys (12-5) for an NFC wild-card game at AT&T Stadium in Arlington, Texas on Sunday. Kickoff is scheduled for 4:30 p.m. ET, and the game can be viewed on CBS.

If you grew up watching football in the 1980s and 1990s, you were probably sick of seeing these teams face each other in the postseason. It seemed either Joe Montana's 49ers were competing for the Super Bowl in the 1980s, or Troy Aikman was leading the Cowboys to the big game on almost a yearly basis in the 1990s. There was some crossover, too, where these teams played three times in the NFC Championship Game in the 1990s. In fact, Jan. 15, 1995 is the last time these teams have faced each other in the postseason.

The Cowboys trounced the Philadelphia Eagles in the regular-season finale last Saturday by a 51-26 score, clearing 50 points for the second time in three games. It appears the Dallas offense will be one to be reckoned with in the postseason.

San Francisco has posted a 5-1 ATS mark in the past six games as an underdog, while going 9-4 ATS in the past 13 games as a road 'dog. In addition, the Niners have cashed in each of the past seven games in the month of January. 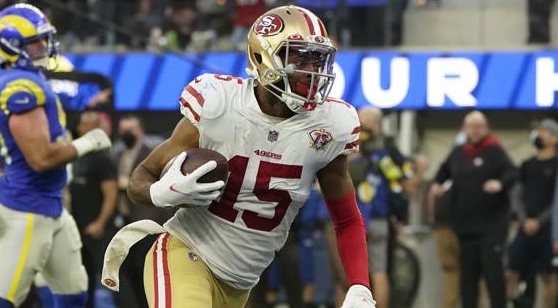 San Francisco is a perfect 7-0 ATS in the past seven games in January. (AP)

INSIDE THE STATS - DALLAS COWBOYS

This might be the most entertaining matchup of the entire wild-card round, as the 49ers and Cowboys get together in the playoffs for the first time since in almost exactly 27 calendar years.

The Cowboys are expected to have Smith back protecting the backside of Dak Prescott, which is tremendous news with Nick Bosa and the strong San Francisco pass rush pulling into town. Dallas led the NFL with 31.2 PPG, but San Francisco certainly has the tools to be able to keep pace. WR/RB Deebo Samuel has been a Swiss Army Knife down the stretch, filling the void with a handful of tailbacks dealing with injuries. The injuries have turned into a blessing in disguise, as Samuel has really bloomed in the offense both out of the backfield and with his hands catching the football. The Cowboys will want to be very concerned with his whereabouts Sunday, or they'll be headed for the couch for the rest of the playoffs.

Dallas was just so-so defensively, allowing 238.2 passing yards per game to rank 20th, and 112.8 rushing yards per game to rank in the middle of the pack at 16th. Can offense win a championship? The saying has always been defense wins championships. The Cowboys might have enough to ease by the 49ers in a high-scoring close game, but this might be as far as Dallas goes.