The Arizona Cardinals (11-6) and Los Angeles Rams (12-5) battle in the NFC wild-card game on Monday night at SoFi Stadium in Los Angeles. Kickoff is scheduled for 8:15 p.m. ET, and the game can be viewed on ESPN, ABC and ESPN+.

These NFC West Division combatants square off for the third time this season. The Cardinals won 37-20 as 3.5-point underdogs against the Rams at this venue in Week 4 as the OVER (54) connected, while the Rams returned the favor in a Monday night game in Week 14 in a 30-23 win as a three-point underdog as the OVER (51) also cashed.

Arizona has posted a 1-4 SU/ATS mark in the final five games, squandering a big lead in the NFC West, as the Rams secured the division title and playoff home game. The offense showed some signs of life with 30 points in a loss to the Seattle Seahawks in Week 18, it's most prolific showing since Week 13 in Chicago. Unfortunately for the Cards, the 38 points allowed were a season high.

Los Angeles suffered a 27-24 overtime loss to the division rival 49ers in Week 18, but it finished 5-1 SU/4-2 ATS in the final six regular-season games to snatch the division title from the Cards. The Rams have scored 20 or more points in seven consecutive games.

The Cardinals frittered away a big lead in the NFC West to lose a home playoff game, but the way Arizona performed on the road this season, it might not be the end of the world. Arizona went 3-5 SU at home, while going 8-1 SU/ATS in nine games away from home.

The UNDER has hit in 13 of the past 17 games on the road for the Cardinals, while going 7-3 in the past 10 as a road underdog, too. While the OVER is 6-1 in the past seven playoff games, while going 6-0 in the past six playoff games as an underdog. The playoff trends can be taken with a bit of a grain of salt, as its last appearance in the postseason was in 2015, ending in an NFC Championship Game loss at Carolina on Jan. 24, 2016.

The Rams have faced the Cardinals once before in the playoffs, when the Cards were based in St. Louis. L.A. won 35-23 on that day in the NFC Divisional round on Dec. 27, 1975. It obviously has no bearing on anything in this game, it's just fun to look back sometimes. 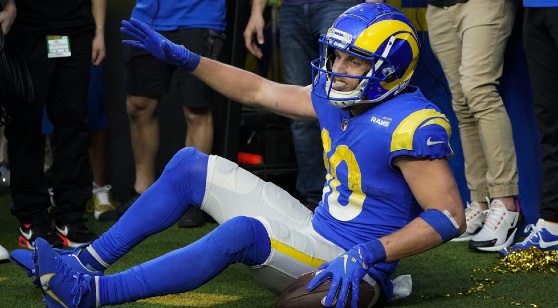 The Rams are 1-5 ATS in the past six games against teams with a winning record. (AP)

INSIDE THE STATS - ARIZONA CARDINALS

INSIDE THE STATS - LOS ANGELES RAMS

The road team won each of the two regular-season meetings, and the road team is 5-2 SU across the past seven in this series. It makes very little sense, but that's how close both of these teams have been lately. It's quite a nice rivalry, and this will be another great chapter.

I think Los Angeles gets it done, however, on its home field. Yes, road teams have dominated lately. Yes, Arizona has been on fire in the regular season on the road. But QB Matthew Stafford has quite the cadre of skill position players at his disposal, WR Odell Beckham Jr. has re-emerged as a threat downfield, RB Cam Akers is back to give L.A. a solid three-headed monster in the backfield, and of course the defense is top notch, too. This is going to be a fun game, with a lot of scoring, before Los Angeles pulls away in the end to close out wild-card weekend.