The Purdue Boilermakers (14-2, 3-2 Big Ten) travel to meet the Illinois Fighting Illini (13-3, 6-0) in a Big Ten conference matchup on Monday afternoon at State Farm Center in Champaign, Ill. Tip-off is scheduled for 12:00 p.m. ET, and the game can be viewed on FOX.

The Boilermakers rebounded from a home loss against Wisconsin on Jan. 3, winning at Penn State while crushing Nebraska at home by a 92-65 count. Purdue was just 1-7 ATS in the previous eight games before smashing the Cornhuskers to cover a 20-point number at home. Purdue hit 49% from the field, knocking down 32-of-65 shots, including 31%, or 9-of-29, from downtown. The Boilers also took good care of the basketball, turning it over just 10 times while outrebounding Nebrasketball 41 to 29.

The Fighting Illini have been a perfect 6-for-6 in league play so far, including an emphatic 68-53 win over Michigan last time out in Champaign on Friday night to cover a 10-point number. Unlikely Purdue, Illinois have been cover kings lately, going 5-1 ATS across the past six, and 8-2 ATS over the previous 10 outings. And while the Illini was so-so from the field in the win over the Wolverines, they were 18-of-21 from the free-throw line, a big difference in a game which saw them even in the rebounding department.

This is going to be an entertaining game between two teams who might be playing for even bigger stakes in the Big Ten into March.

Purdue loves to run wild on offense, scoring 85.6 PPG to rank fifth in the nation. It’s a tremendous shooting team, too, hitting over half of all field-goal attempts at 50.6%, ranking third overall. And yes, it’s bombs away for Purdue, too, cashing in on 40.1% of all threes to rank fifth in that category, too.

If the Boilermakers have a weakness, it’s at the free-throw line, where they have hit just 72.6% overall this season. That could be a problem in close games, and we saw that issue against Wisconsin when they misfired nine times on 24 attempts in a five-point loss.

The Boilermakers are just 1-4 ATS across the past five outings, and 2-7 ATS in the past nine games overall. Purdue has played just two true road contests this season, losing on a last-second buzzer beater at Rutgers on Dec. 9, and scraping by Penn State 74-67 on Jan. 8. Purdue covered in neither game, and a trip to Illinois represents a much greater test. For totals, the OVER is 4-0 in the past four games overall, but the high-scoring ways have come against three teams unlikely to be around when the madness begins in March.

Illinois for a fourth consecutive victory in this series, and it is 2-0-1 ATS across the past three wins. It pushed against the number in last season’s lone matchup, a 66-58 victory in this very same venue as the UNDER connected. That’s been a common theme in this series lately, too, a lot of defense, with UNDER going 3-1 in the past four meetings.

Kofi Cockburn continues to lead the way and challenge for Big Ten Player of the Year honors, averaging 21.9 PPG and 12.3 RPG while posting a stellar 60.2 FG%. The Illini got off to a bit of a slow start this season, as he missed the first three games due to a suspension. But this team has really had just one hiccup, against an equally good Arizona team, while winning 11 of the past 12 outings overall.

The OVER is 9-2-1 across the impressive 12-game span, although the offense was put to the test against a good Michigan defense last time out in a rare UNDER result. The Illini will face a Boilermakers D which allows just 66.5 PPG with a so-so perimeter defense, but Purdue will have trouble holding down Cockburn and company. 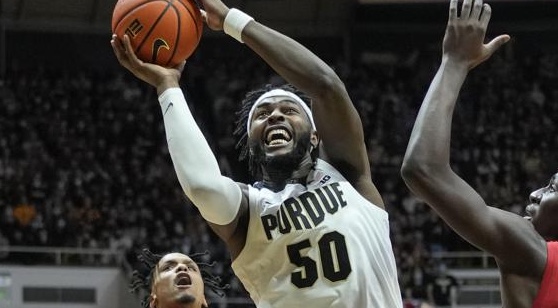 The difference here is venue. If this game were in Purdue, I would trust the Boilermakers to defend their home court, but they just haven’t looked good on the road. Purdue has faced two weaker conference teams on the road, losing a heartbreaker to a mediocre Rutgers side, while struggling to get a win at Penn State against one of the worst teams in the conference.

Illinois has a Player of the Year candidate in Cockburn, and Purdue will need all hands on deck in this one, and it cannot shoot poorly at the free-throw line like we’ve seen in previous games. The Illini lost Andre Curbelo to a neck injury in mid-December, but have marched on without skipping a beat. Alfonso Plummer has stepped up his game, and Trent Frazier is an outstanding tertiary scoring option. This team has four players averaging double digits in points, and plenty of rebounding. And I hate to harp on this one particular area, but the Illini is a good free-throw shooting team, too, and in a close game that’s usually the difference down the stretch. It will be here, too.