The Marquette Golden Eagles (12-6, 4-3 Big East) travel to meet the Villanova Wildcats (13-4, 6-1) in a Big East conference tilt on Wednesday night at Finneran Pavilion in Villanova, Pa. Tip-off is scheduled for 8:00 p.m., and the game can be viewed on CBS Sports Network.

It's been rolled coaster ride for Marquette, as the Golden Eagles dropped four straight games from Dec. 11-Jan. 11, going 1-3 ATS. Since Jan. 4, a blowout win over Providence, the Golden Eagles are 4-0 SU/ATS in the past four outings, including three victories by at least 11 points. Marquette topped Seton Hall in Milwaukee last time out on Saturday to win 73-72 as two-point underdogs. The Golden Eagles weren't that great, hitting just 42%, or 25-of-59, from the field, but they were outstanding from behind the arc at 50%, or 11-of-22. The Golden Eagles also took care of the ball, turning it over just nine times, winning despite a 45-to-26 rebounding disparity.

Villanova lost the Big East opener at Creighton back on Dec. 17, getting pounded by 20 points as a 7.5-point favorite. Since then, the Wildcats have rattled off six straight victories and covers, including a 40-point rout of Butler last time out on Sunday. 'Nova was on fire from the field, hitting 60%, or 28-of-47, from the field, while burning up the nets with a 63%, or 12-of-19, mark from behind the 3-point line. The Wildcats also missed just one of their 15 free-throw attempts, while turning over the ball just 10 times. Villanova had a very balanced offensive attack with four or more scorers with 14 or more points and five or more rebounds.

Marquette has won and covered four in a row after an 0-4 SU/1-3 ATS skid from Dec. 11-Jan. 1. That includes wins over Seton hall, DePaul and Providence at home, while blowing out Georgetown on the road.

The Golden Eagles have dropped three in a row in this series, with Marquette going just 2-5 ATS in the past seven meetings. The last time these teams met was at Villanova on Feb. 10, 2021, a 96-64 blowout win by Villanova as the OVER connected. The OVER also hit in Milwaukee in the first meeting last season on Dec. 23, 2020, an 85-68 win by the Wildcats. Marquette's only wins in the past 10 games, accomplished three times, has been in Milwaukee. They're 0-5 SU/2-3 ATS in the past five trips to 'Nova.

Villanova punished Butler by 40 points last time out, covering a 15-point number. That's six straight wins and covers since the team's last SU/ATS loss at Creighton back on Dec. 17. Four of the six games have been wins by 13 or more points, too, including all three of the wins at home during the span.

The OVER/UNDER has alternated in each of the past eight games, with the UNDER going 3-1 in the past four games at home. The 82 points scored by Villanova was the highest point total since dropping 100 on Howard on Nov. 16. Villanova is 4-0 ATS in the past four as a double-digit favorite, and 6-2 ATS in eight games overall in games when favored by 10 or more points. 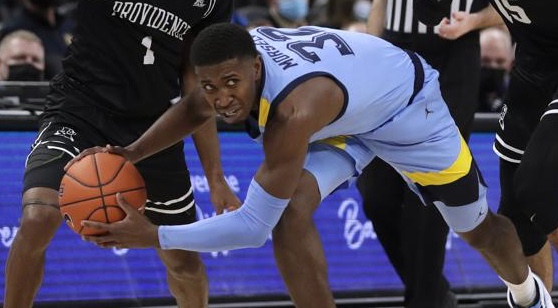 Marquette has covered in five of the past six games on the road. (AP)

Marquette has been red-hot lately, but overall and on the road, as far as the number is concerned. The Golden Eagles have picked up four straight victories, including a ranked win against Providence on Jan. 4. Two of the four wins have been as a straight-up underdog. However, Villanova has been even hotter, especially when favored by double digits. The Wildcats tend to start fast, and finish faster, especially at home.

The favorite has cashed in four of the past five meetings, but the Wildcats are going to have a difficult time cashing as a double-digit favorite against a red-hot Golden Eagles team. Marquette has just two players averaging double digits in points, so it's important for Justin Lewis and/or Darryl Morsell to stay out of foul trouble. If either of those two are forced to the bench, this one could get away from Marquette in a hurry against a much more deeper team. As it stands, 12.5 points is quite a big number in a conference battle between upper-echelon teams.