St. John's heads to Creighton looking for consecutive victories for the first time since a three-game win streak from Dec. 5-12 out of conference. The Red Storm haven't had consecutive covers since opening the season with a 3-0 ATS run from Nov. 9-17. Last time the Red Storm played they roughed up the Georgetown Hoyas 88-69, hitting 52%, or 30-of-58, while hitting 39%, or 7-of-18, with just 10 turnovers. The Red Storm was outrebounded 34-27, but made up for it with 13 steals to just four for the Hoyas.

The Bluejays have suffered back-to-back losses, including an ugly 75-41 road loss at Villanova on Jan. 5. They followed that up with an 80-73 loss at Xavier, although they covered a 9.5-point number. They'll be glad to be back on the home floor after a 79-59 victory against 'Nova on Dec. 17, although Creighton has won just once in the past three at home while going 1-2 ATS in those outings, too.

The Red Storm have had a difficult time piling up victories lately, going 2-3 SU/ATS across the five games overall, while going 0-3 SU/2-1 ATS in three true road games so far this season. The OVER has cashed in each of the two St. John's conference road games.

The Bluejays have had a very difficult time lately, losing two straight games on the road at Villanova and at Xavier. Prior to that, Creighton won in overtime at Marquette on New Year's Day, 75-69. The last time it won in regulation was a 79-59 victory against Villanova in Omaha on Dec. 17.

Creighton has had success against winning teams, going 4-1 ATS in the past five against teams above .500. For totals, the UNDER has dominated for Creighton, going 14-6 in the past 20 games overall. The UNDER is 10-4 in the past 14 games at home, too. 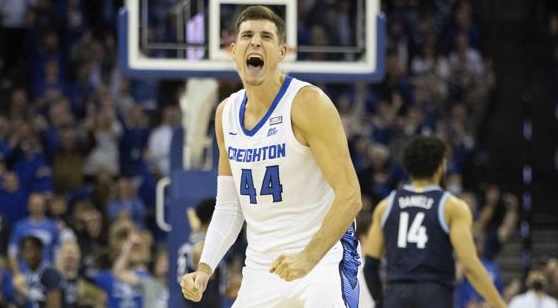 The favorite has covered in 10 of the past 13 meetings in this series. (AP)

These are two mediocre teams in desperate need of a victory facing off in Omaha. The difference here between two very similar teams might be the fact that Creighton is playing on its home court.

The Red Storm posted a 19-point win and cover against Georgetown last time out as the UNDER connected, snapping a two-game losing streak. St. John's has lost all three of its true road games, although it has covered two of those outings. Creighton has won just once in the past three games, but that most recent showing was an emphatic 79-59 victory against Villanova as 7.5-point underdogs as the OVER connected. The Bluejays have cashed in three of the past four games, but they'll have a difficult time cashing against the Red Storm. I just don't see them winning by more than five points, although the Red Storm doesn't give you much to be excited about with their track record on the road.