The Wildcats have registered three consecutive victories since a 77-73 setback at Tennessee, including an 82-64 victory against Utah last time out. Arizona just missed the cover as 19-point favorites while the UNDER connected. Arizona hit 51% of its field-goal attempts, or 33-of-65, while outrebounding the Utes 32-27. The Wildcats were able to prevail despite the fact they hit only 3-of-18, or 17%, from behind the arc. It was all about Azuolas Tubelis with 32 points, eight rebounds, five assists, two steals and a blocked shot in 36 minutes while connecting on 14-of-24 from the field. Christian Koloko managed 16 points on a perfect 7-of-7 from the field, and he swatted four shots.

Stanford pulled off an impressive 75-69 against a Top 5 team from USC, cashing as 6.5-point favorites, and then the Cardinal went to Pullman and posted a 62-57 win at Washington State on Jan. 13 as seven-point 'dogs. Unfortunately for the Cardinal, they fell 67-64 at Washington last time out on Saturday. Stanford managed to hit just 45% from the floor, going 22-of-49, while hitting 6-of-20, or 30% from behind the arc. It's amazing Stanford lost by just three despite the fact it turned the ball over 21 times, while Washington coughed it up just eight times.

The Wildcats have fired out to a 4-0 start inside the Pac-12, although they're just 1-2 ATS across the past three conference teams while hitting the UNDER in each of the past two. Arizona has won each of the past three games by 16 or more points during the three-game win streak against Washington, Colorado and Utah, but it win on the road? The Wildcats passed a huge road test at Illinois on Dec. 11, winning 83-79, but they fell 77-73 at Tennessee. Still, those are a couple of heavy hitter, not a mediocre Stanford team.

For totals, the Wildcats have cashed the UNDER in four of the past five games overall, while going 5-1 in the past six games against teams with a winning overall record. The UNDER is also 5-0 in the past four games following a straight-up win, too.

Stanford's loss at Washington last time out on Saturday snapped a 4-0 SU/ATS run. The Cardinals haven't had non-covers in consecutive games for the first time since Nov. 20-23 at Baylor and North Carolina A&T. 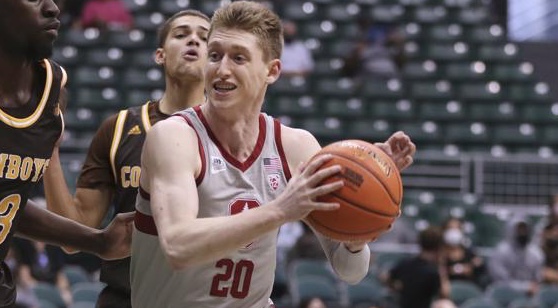 Stanford has posted a 6-0-1 ATS in the past seven games vs. winning teams. (AP)

INSIDE THE STATS - STANFORD CARDINAL

The Wildcats hit the road to battle the Cardinal, and suddenly Stanford is not looking as impressive as last week. When the Cardinal topped USC, that was super impressive. However, USC has lost two of the past three overall, and it doesn't appear they're in the same class as Arizona right now. The Wildcats haven't had any hiccups, and even when one facet of their game isn't working, they're deep enough and talented to pick things up in another area to mask deficiencies.

Arizona is a deep team with plenty of talent, with plenty of rebounding from Koloko, Mathurin and Tubelis, and that trio accounts for 47.2 PPG of the 88.5 PPG this team posts. Arizona ranks No. 2 in the country, while ranking No. 8 in field-goal percentage at 49.9%. If this team has a weakness, it's from behind the 3-point line. Stanford is not going to be able to hang in this game, as the Cardinal struggle on offense, and they're allowing 68.7 PPG, which is 182nd in the country. The high-octane offense of the Wildcats will be too much for Stanford to handle.