The UFC returns to the UAE on Oct 30, 2021 for it’s 267th PPV event, headlined by Jan Blachowicz and Glover Teixeira. The two will battle it out for the Light Heavyweight title, the challenger being Teixeira, and Blachowicz being the defending champion.

Listed below are my Best Bets, Preview and Analysis for the early card on Saturday. 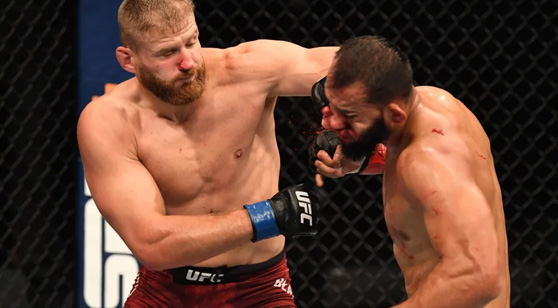 UFC Lightweight Champion Jan Blachowicz gets to defend his title as a betting favorite. (AP)

UFC Lightweight Champion Jan Blachowicz gets to defend his title for the second time. He faces no. 1 challenger Glover Teixeira.

Blachowicz is a savvy veteran with slick striking. To call Jan well-rounded is an understatement. The champion knows how to mix it up well on the feet and is well-versed in the grappling department as well.

The Polish 205-pound champion is coming off a huge win over reigning 185-pound champion and UFC megastar Israel Adesanya. He has wind in his sails coming into this fight.

Teixeira is also a veteran, but possesses a much more one-sided skill set. His game plan is usually getting his opponent down and pounding them out or sinking in a submission.

Both men are riding on five-fight win streaks coming into their highly anticipated UFC 267 clash.

The striking gap is everything in this fight, and the champion excels in that area. While Glover is an expert grappler, he needs consistent grappling exchanges to win this fight.

As it so happens, Glover’s recent opponents have had a mysterious habit of either taking him down or following him down as he pulls guard. The Thiago Santos fight left me puzzled as to why Santos willingly engaged in the grappling with a guy like Glover, when any fighter at that level should know better.

Blachowicz is a guy who seems to be aware of his strengths and weaknesses. More importantly, he knows where to take a fight to win.

Teixeira doesn’t chain wrestle, and only averages two takedowns per 15 minutes. I think he needs to completely dominate every round with top control if he wants to win here.

On the other side Blachowicz could comfortably keep the fight standing and box his way to a decision or KO win.

All in all, the victory goes to the man with the largest toolbox -- and that’s the champion here. 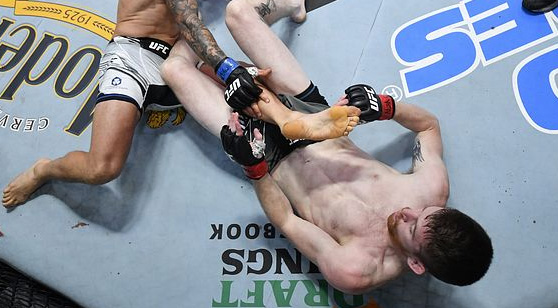 Originally scheduled to rematch Aljamain Sterling for the 135-pound title, Petr Yan now gets a new opponent for October 30. He will now take on top contender and striking phenom Cory Sandhagen for the Bantamweight interim title.

Petr Yan, (15-2) was the reigning champion of the Bantamweight division, halfway through beating the brakes of Aljamain Sterling, until disaster struck. The former champion illegally kneed Sterling which would cost him the fight via DQ. Now he’s back to get the strap once more.

While No Mercy tends to do most of his work on the feet, Yan has an impressive ground game to fallback on, should he find the need to go for a takedown. The Russian averages just over two takedowns per 15 minutes, and even took down Sterling seven times in his most recent bout. The guy is well-rounded.

Cory Sandhagen, 29, is 14-3 in MMA and is one of the more touted prospects in the 135-pound weight class. Sandhagen recently had a hard-fought loss against former champion TJ Dillashaw in a fight many fans scored in favour of Cory.

Controversy aside, fans of The Sandman now get to celebrate as he takes on Petr Yan for the interim strap.

My message to Sandhagen pic.twitter.com/lSdl07WT9q

I don’t think Yan wants to stand and strike from a distance with Sandhagen, and the Dillashaw fight really exposed some holes in Sandhagen’s game. I do actually think he won that fight, but he still allowed Dillashaw to control him on the fence for way too long.

Now, Yan has that well-roundedness that I talked about earlier, and I think he plans to utilize his grappling for this fight.

Sandhagen’s takedown defense isn’t that great, and he isn’t strong in the clinch either. If Yan can get this fight to the ground and get off some good ground and pound, he might be able to either get a stoppage or a decision victory.

However, if he decides to test his hands against Sandhagen I think he’s doing himself a massive disservice. Allowing Sandhagen the center of the octagon gives him every opportunity to either land something big or pull away on the strike totals. Either scenario is unwanted if you’re Petr Yan looking to reclaim his title.

Yan has shown good fighting IQ in the past, so I expect him to do the same for this fight.

Sandhagen is also the one fighting on short notice here, and he really didn’t deal well with the constant pressure of Dillashaw in his most recent outing.

In a pure striking bout, Sandhagen wins, but this is MMA. Yan will use the cage and go for takedowns to great effect.

Khabib Nurmagomedov’s protegé Islam Makhachev finally gets the step up in competition we’ve all been waiting for.

Makhachev was originally scheduled to take on Rafael Dos Anjos, but as he withdrew, Dan Hooker took his place.

That being said, he still faces a striker on Saturday, in a matchup that favours him on paper. Forget Hooker’s impressive takedown defense for a moment, this fight will undoubtedly hit the ground eventually. Can the Australian get back up?

I seriously doubt it. Those Dagestani wrestlers are something else. The top control is heavier than anyone Hooker has trained with, and let’s not forget he is stepping in on short notice.

Height and reach are in favour of the striker, but the striking numbers for Hooker aren’t good enough to make me pick him here. 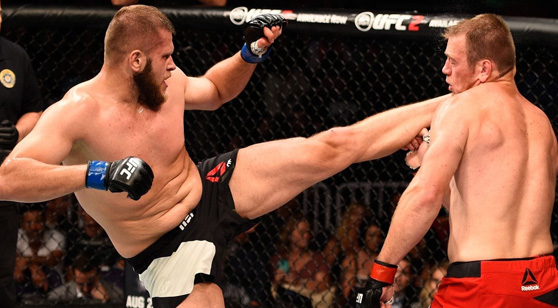 Marcin Tybura has been on a roll, winning five straight matches in his last five matches. (AP)

The Russian heavyweight behemoth Alexander Volkov appropriately nicknamed ‘Drago’ is back this weekend to take on surging contender, Marcin Tybura, who has secured five wins in his last five outings.

Taking a look at the X-factor, I’ve gotta say Tybura is in for a rough night if this fight stays standing. The striking is in favour of Volkov.

Tybura does have some grappling to fall back on, but rarely have we seen him chain wrestle effectively. He averages about one or two takedowns per fight.

‘Drago’ is ferocious with his striking, and even Curtis Blaydes mentioned how hard it was to take this guy down. I don’t exactly rate Tybura and Blaydes as equals when it comes to wrestling.

Volkov might end up on his back once or twice, but Tybura doesn’t have the defensive striking abilities to keep himself out of danger once Alexander gets back to his feet.

The knockout is inevitable, whichever way you look at it. Let’s not forget this is a heavyweight fight. I’ll argue that strikers have a much better shot at beating the grapplers at this weight class. One shot is all it takes after all.

One of the biggest MMA prospects, Khamzat Chimaev, makes his return after a 12-month hiatus when he takes on Li Jingliang in a three-round 170-pound bout.

Chimaev, 27, is unbeaten in MMA at 9-0 (3-0 in the UFC), and has steamrolled every single opponent he has ever faced. Khamzat made headlines last year after competing thrice in the span of 67 days. He was in many ways the face of Fight Island.

Unfortunately, Khamzat would run into a severe case of COVID-19, leaving him inable to compete for the better part of a year.

The Leech is coming off a first-round KO win over touted prospect Santiago Ponzinibbio, and has shown that he can win as the underdog on more than one occasion.

Skill-for-skill, there’s little data in Khamzat’s recent outings that show any signs of weakness in the cage. In his three UFC outings he has absorbed a total of one strikes, while landing 87 of his own. The only real advantage for Jingliang is the fact that Khamzat is coming off a 12-month layoff, battling COVID-19 for most of it.

How badly will Chimaev be affected?

This question will not be answered until the two fighters step in the cage on October 30, but it’s perhaps fair to assume that Chimaev will show up as ready as ever, since he felt that this was the time to make his comeback.

If he does show up looking like he used to, I have little doubt that Jingliang will get beaten from pillar to post and finished.

Jingliang has a fairly well-rounded game, and he has punching power, but his skills just don’t compare to Chimaev’s and the level of dominance he has shown.

At the current betting line of -400, we are already getting far more value on Khamzat than ever before -- the question mark of his lingering COVID-19 struggles are already baked into the betting line. Why not take advantage of that?

There is only one side to back in a fight like this. If Khamzat wins in dominant fashion, we might never get a price like this on him again.

One of the biggest 205-pound prospects, Magomed Ankalaev, takes on hard-hitting ranked contender, Volkan Oezdemir, on the main card of UFC 267 this weekend.

Ankalaev is an especially scary prospect because he doesn’t appear to have any weaknesses. His sole professional loss came at the hands of Paul Craig by way of last-second submission.

In this fight, he faces a pure striker in Oezdemir, who always looks for the knockout while rarely engaging in grappling exchanges.

Ankalaev’s striking is quite frankly close to being flawless. His technique is smooth, and he has fight-ending power to keep his opponents’ from walking him down.

The x-factor here is the fact that Oezdemir isn’t a grappler. On the feet Ankalaev has superior abilities, and we’ve seen how he deals with forward-marching finishers before - most notably in his two bouts against Ion Cutelaba.

Oezdemir is also coming off the first KO loss of his career making he question his confidence coming into Saturday’s bout.

All in all, I won’t fade Ankalaev in a favorable matchup. Oezdemir is a tough cookie and he might be conscious to hear the final bell, but he will definitely not get his hand raised in the end.

Ribas’ divisional ascent was brought to a halt when she was knocked out by Marina Rodriguez in her last outing. Amanda is a well-rounded fighter with abilities in all departments.

Her striking will most likely come into play for her on Saturday however, as she takes on the wrestling Jandiroba.

X-factor wise I’ll say Ribas’ grappling probably cancels out that of Jandiroba, meaning we will get a fight taking place mainly on the feet. This is very much in favor of Ribas if you ask me, as Virna tends to struggle severely getting off anything significant on the feet. This is a tough matchup for the underdog.

Jandiroba does have that wrestler grit and determination, but Ribas’ is so much more effective standing - I seriously doubt Virna can go blow to blow with Amanda and edge her out on the scorecards.

Just going by the statistics, Ribas tends to do far better on the strike totals. When the strike differential difference is that big, it has to count for something.