UFC Lightweight champion Charles Oliveira is set to defend his title against the division’s number one contender, Dustin Poirier, in the main event of UFC 269.

“The Diamond”, Poirier, has picked up more momentum in his two last bouts than most, as he has bested UFC megastar Conor McGregor twice in a row. All eyes are on him to become champion on December 12.

Standing across the cage from him will be Oliveira, who is on a record breaking nine-fight win streak coming into his title defense against Poirier.

In the co-main, the greatest female fighter of all time, Amanda Nunes, takes on the next challenger in line for a title shot as she will defend her 135-pound crown against Julianna Peña. Nunes has won 14 straight heading into her bout against Peña, and has amassed a whopping seven title defenses during that run. Should she get the W at UFC 269, which she is heavily favored to, she will be just one title defense behind tying with all-time legend Georges Saint Pierre for fourth most title defenses in UFC history. The stakes are high.

The UFC 269 fight card has many intriguing matchups on tap including, but not limited to, Sean O’Malley taking on Raulian Paiva, Geoff Neal versus Santiago Ponzinibbio, and Kai Kara-France against former 135-pound champion, Cody Garbrandt. 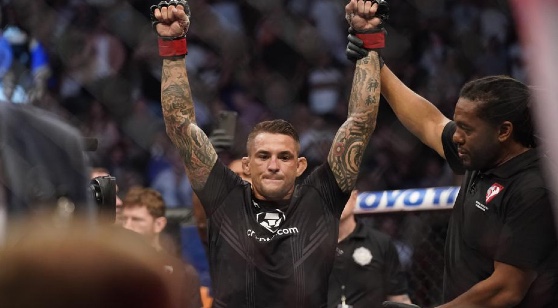 Oliveira was just your run-of-the-mill contender at Featherweight and Lightweight, back in 2016. But while enduring eight losses on the big stage is no feat in itself, if you draw experience from each loss, you can fix the holes in your game and elevate your skills to the next level. That is, and forever will be, the story of Oliveira’s career.

The guy was 10-8 in the UFC by the end of 2017, and starting 2018 he would embark on one of the most legendary win streaks the 155-pound division has ever seen. Since being knocked out by Paul Felder on a rainy night in Detroit, Michigan, Oliveira has won nine straight. Charles “Do Bronx”, is a lethal grappler with the record for most submission wins in the UFC. That should tell you all you need to know about his abilities on the mat.

On the feet the champion is no slouch either, as he has won three of his last five wins by way of knockout. He most recently KO’ed hard-hitting fan-favorite Michael Chandler in a bout that mainly took place on the feet. He can definitely strike. For those of you familiar with Poirier, you already know his striking is his biggest weapon. Well, actually, I’ll actually say that his grit and determination are his secret weapons in the octagon, as he often displays incredible fighting spirit when he steps in the cage.

Poirier usually gets clipped at some point when he fights, but whereas a hard shot usually rendered him unconscious during his days at Featherweight, a less painful cut down to 155 has seamlessly granted Poirier a much improved chin. He has taken hard shots from the likes of Gaethje, Holloway, McGregor and Hooker, without toppling over.

When it comes to dishing out damage, Poirier is among the top of the division. He tends to land serious damage on his opponents when given openings, and when he smells blood in the water he always closes the show. Oliveira will have to put on his best poker face in this fight.

Grappling-wise Poirier is a black-belt in jiu-jitsu, so I don’t expect him to be a complete fish out of water if the fight hits the mat, but I have no doubt that Poirier will do everything in his power to remain upright for the entire duration of this bout.

Oliveira, on the other hand, will do everything in his might to secure takedowns. On the feet I give Poirier the advantage, but Charles has shown that he can hold his own, and survive, against lethal strikers before.

Personally I see a huge difference between guys like Michael Chandler and Poirier, mainly in regards to the punching power. Poirier is not, and has never been, a one-punch KO kind of guy. He usually finishes fights with flurries of punches and leaves opponents overwhelmed. Chandler mostly separates opponents from consciousness when he lands clean.

For that simple reason, I think the advantage should go to Oliveira as he will have more openings to shoot in on Poirier to secure takedowns, whereas Poirier will be deterred from overextending due to fear of getting taken down. We have seen the effect the grappler has on the striker’s striking so many times in the past, and I think we will witness it once again for the UFC 269 main event.

Grapplers just always hold that trump card over strikers, and even though I rate Poirier’s grappling as being quite impressive, Oliveira is just in another dimension when it comes to submissions and scrambles - possibly only rivalled by a Khabib Nurmagomedov or an Islam Makhachev.

Let’s also not discredit the win streak Oliveira is on. Nine wins in a row has some huge statistical significance behind it, and when the guy on said win streak is priced at plus money, I have to take a stab at him. This fight is a 50/50 at best, so I have to pick the ‘dog.

Amanda Nunes takes on the next sacrificial lamb, this time at 135-pounds. In all seriousness, Julianna Peña actually seems far more confident than the majority of Nunes’ opponents as of late, and that is a big plus when you’re looking to beat the unbeatable opponent.

Ige is more of a well-rounded guy with some wrestling in his back pocket, but tends to struggle against guys strong enough to puck him around in the clinch.

I think Emmett will have the strength advantage.

If this was the sum of all factors affecting this matchup, I’d confidently pick Emmett, but unfortunately, the guy has been injury prone for quite a while since 2020, and has not fought in two and a half years coming into this weekend’s bout.

Emmett’s absence means that he is no longer on the young side, unfortunately for him, and Ige has a great age advantage in this fight.

The thing is, Ige needs to wrestle to win here, and he rarely keeps guys down for a long period of time and wins due to control time.

I think Emmett keeps this on the feet and punishes Ige with that power of his. In spite of the x-factor being the hiatus on Emmett’s side, I think this is a nightmare matchup for the younger Dan Ige.

Ige has never been finished though, and he has that aforementioned wrestling to fall back on if he gets hurt. We’ve seen him do this before - he is very adept at surviving.

Cruz is mostly known by the hardcore fans for his rivalries with Urijah Faber and TJ Dillashaw back in the day.

Due to injuries Cruz was kept out of competition for three years after losing his belt to Cody Garbrandt in 2016, and came back to face defeat at the hands of Henry Cejudo in 2020.

The former champion was able to bounce back with a win over Casey Kenney in May however, and now he’s looking to get back in there and get a win streak going.

Pedro Munhoz, is a hard-hitting striker with murderous leg kicks. If you’re aware of how Cruz fights you know he relies a lot on his movement and footwork.

Before even digging into this fight I thought the leg kicks of Munhoz would be the x-factor in this bout, and watching tape on both guys increased my confidence in that prediction.

Cruz’ footwork is unrivalled, but only when he’s allowed to bounce around. We’ve seen in the past that if opponents take his legs apart, his main weapon can be taken away. Cejudo was able to do this in their fight.

Munhoz’ main weapon is his leg kicks, and in some fights he even throws more leg kicks than head strikes.

Grappling-wise Cruz probably has the wrestling advantage, but in turn Munhoz has the submission advantage over the former champion so I wouldn’t be surprised if we get a striking bout on Saturday.

I feel like the power advantage goes to Munhoz overall, and Cruz tends to win on the scorecards. I give technique to Cruz in a boxing fight, but I can’t see a scenario where Cruz’ legs aren’t beat up badly by the end of the first round. It’ll all be downhill from there.

There’s also a factor of Munhoz being a consistent contender in the 135-pound division, fighting the best, whereas Cruz was sitting on the sidelines for the better part of three years up until one year ago.

All in all, I favor Munhoz and his leg kicks on Saturday.