The last two winners of NASCAR’s annual All-Star Race have been listed as this week’s favorites: Kyle Larson won in 2019 and is the 5/2 favorite to win at William Hill sportsbooks and Chase Elliott won in 2020 and is 6/1 second choice to win.

But none of those wins matter this week because the non-points race is at a different track with an entirely new race package and a wild rules format that should shuffle things up often by inverting the field a few times in the six rounds as they’ll run a total of 100 laps (Rounds 1 through 4 will be 15 laps each, Round 5 will be 30 laps, and the final round will be a 10 lap dash).

Drivers who have won a race since 2020, won a past All-Star Race or Cup Championship are eligible to participate. That means 17 drivers automatically qualify and four more will come from the All-Star Open.

This year’s All-Star Race is at Texas Motor Speedway’s high-banked 1.5-mile layout with $1 million in prize money given to the winner. A Hendrick Motorsports driver has won the last four points-paying races on the schedule. Larson has won the last two races and has been runner-up or better in his last five starts overall. Elliott has been third or better in his last four starts. They’re both dialed in whatever package is being used, but this week everyone will be using a race package with 510 horsepower which hasn’t been used anywhere yet. 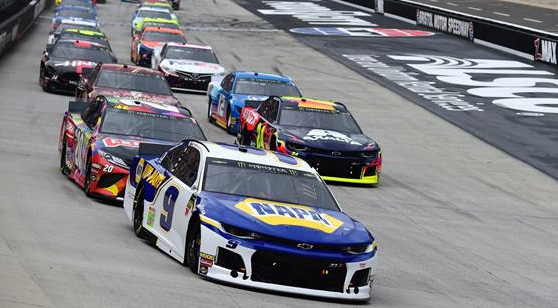 The big question I have here is how much inverting the field at each stage will affect the outcome in the final 10 lap dash which is set by the finish position of Round 5. Crew chiefs and drivers are trying to get a grip on the rules and package as well.

“I think the biggest thing is that you’re going to have the low horsepower, even lower than the horsepower we have currently,” said William Byron who is 10/1 to win. “It’s going to put us closer together, more nose-to-tail, and probably will be drafting constantly. That’s going to make it tough. You’re going to have to have a good handling car to try (to) drive away from people, but I feel like it’s still going to be hard to really ever get away. We’re focusing on getting the handling right, and I think we’re in the ballpark. We’ll just have to see what happens.”

Byron is definitely someone to consider for a win just because he’s been ninth or better in all five races on 1.5-mile tracks using the 550 HP package which includes a win at Homestead.

But with the field being inverted so often, will the best car be able to emerge from the back and get to the front in time for the last 10 lap dash? That’s not a lot of time to move through the field. Strategy is going to be key and everyone will be in the same boat of not knowing what to expect. It’s the All-Star Race and requires the crew chief to examine more than a regular race.

“For me, numbers are a fun Rubik’s Cube,” said Greg Ives, crew chief of the Hendrick Chevrolet driven by Alex Bowman. “I like the more intricate that it gets. The invert following the rounds throws in a lot more details and unpredictability that you can’t really solve in a simple math calculation. Ultimately, our job is to go out there and perform at a high level. I am pretty sure at the end of each round they are going to figure out what the invert is and we are going to line up and go as fast as we can again. Hopefully, we have a chance to lead and won’t be in traffic. Hopefully, we can cross the finish line first at the end of the day. That is really all we can focus on. The uniqueness of the format for this event is what is creating all of the buzz and, ultimately, it is what it is and hopefully we can have some fun.”

Bowman is 12/1 to win and deserves consideration based on solid runs at Charlotte (5th) and Atlanta (3rd). Both his wins this season came with the 750 HP package.

But Larson is still the driver to beat despite all the inversions (see rules below) just because of what he’s done on 1.5-mile tracks this season leading the most laps in four of the five races and winning two of them with both came at Texas sister tracks in Las Vegas and Charlotte. Larson will be fast again this week even if he doesn’t know the rules yet.

“I haven’t studied the format yet, but the plan is to get the best possible finish in each segment to give us the best possible starting spot when it matters,” Larson said earlier this week. “It’s a short race, so you have to be aggressive, and you have to be really aggressive on each restart. Our mile-and-a-half program has been solid all year, so I’m really looking forward to this Sunday.”

Solid all year? Larson is being modest. How about the absolute best with no equal.

But the chance of someone else stealing this race is a strong possibility. Larson has battled dirty air this season while being stuck in traffic behind leaders, but not over and over again like the inversion could shuffle him to the back multiple rounds.