We’ve got a Saturday night special at Bristol to close out the round of 16 in NASCAR’s Playoffs meaning four drivers are going to get chopped. It’s great reality television I can’t wait to see what unfolds. Come on Bass Pro Shops NRA Night Race, do your thing.

I’ve got exact clinch scenarios from NASCAR down below, but let’s talk about how to approach some of those drivers from betting. Obviously, it starts with who we're talking about or what team they drive for.

Joe Gibbs Racing and Hendrick Motorsports drivers should all be considered, even Martin Truex Jr. who has only two top-fives (no wins) in 30 Cup starts at Bristol. Those two teams are way ahead of everyone, except Joey Logano from Team Penske has been crushing it with the low downforce race package featuring engines producing 750 horsepower. He has nine top-fives this season, all using this week’s race package.

Drivers near the cutoff can’t go for broke to win, they need to point race and keep updated by the crew all race where they stand and where their closest competitor stands. Winning races isn’t a priority unless they have a rocket that has a mind of its own. I would only take a fringe driver in points if they belonged to the top two teams.

We’ve had 16 races this season using the 750 HP package and JGR has six of them while HMS has seven wins. Logano has one win as well, his only 2021 win and it came at Bristol -- kind of -- in the spring.

NASCAR and Bristol came up with the great idea to throw dirt on the high-banked concrete half-mile layout during the spring event and race on the dirt. NASCAR likes its tradition some days, and some days they don’t. For 60 straight years, until 2021, Bristol had two races on the world’s fastest half-mile, the concrete layout.

The Dirt Race wasn’t fun to watch for me because it wasn’t fun for the drivers, or at least most of them. They couldn’t see in front of them because of all the dirt and dust. Imagine that. This was a gimmick and I don’t like using one of the Bristol races for a gimmick using road racing tires. NASCAR says people like the dirt race so they’re doing it again in 2022 as they revealed Tuesday. Use an unused old track with loads of history to run dirt races. Don’t take away one of my favorite races on one of the unique tracks for it.

Anyway, Logano’s only 2021 win came on the dirt at Bristol. He has two real Bristol Cup wins on the concrete.

The thing the regular Bristol racing produces is drivers getting angry with one another. Temper-tantrums, retaliation, and lots of hurt feelings add to the playoff vibe with four drivers' chances at winning a title being eliminated.

“A cutoff race at Bristol is perfect,” Chase Elliott said. “It’s a great event. Like I said, it’s one of my favorite races of the year and, honestly, I feel like it is one of the most exciting events of the year. It’s one that has been that way for a long time on our schedule. I think that’s a great place for a cutoff, and I am glad it’s in the playoffs.”

Hell yes, Chase! This is going to be fun. Among active drivers, Elliott has the best average finish (12.1) in his 12 Cup starts which has three top-fives and 310 laps led.

Kyle Larson is considered the favorite based on being the best with this week’s race package, although Truex does have four wins with it. Larson has led 641 laps at Bristol in his 12 Cup starts with no wins but two runner-ups.

“Bristol is cool all the time, but the night race, to me, has a little bit more meaning than the spring race because of the atmosphere around it,” Larson said. ”The lights, the crowd, the energy is just up for the night race. It makes me excited, and it makes me want to win there even more.” 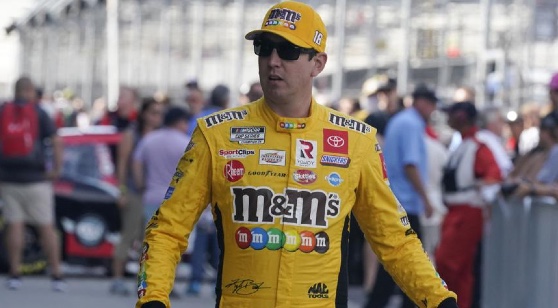 Kyle Busch enters Saturday's race as the favorite (4/1) despite failing to see a Top 5 result in six of his last seven races. (AP)

Larson last raced on the Bristol concrete in 2019, started second, finished sixth after leading 61 laps. Alex Bowman has an interesting look coming in right on the cusp of transferring over. He just has to gain points.

“I think we need to maximize stage points and hopefully that has us in a good spot at the end of the day,” Bowman said. ”I don’t think we are in a must-win situation by any means, but when you are racing Kurt (Busch) and Kyle (Busch) and guys who are so good at Bristol, it is going to be tough. We are going to go do everything we can to win the race. I don’t think we are going to put ourselves in a situation where we either win or run 30th. We are just going to go maximize the day and do the best we can.”

Bowman has two of his three wins using the 750 HP package (Richmond, Dover). It’s interesting that he brought up the Busch brothers considering they have 14 wins combined on the Bristol concrete. Kyle Busch leads all active drivers with wins, (8), top-fives (14), and laps led (2,591).

“Bristol Motor Speedway is one of the best racetracks on the circuit,” Kyle Busch said. “All the fans love it because of the excitement, the run-ins and the close-quarter action with all the cars being packed on top of one another at a half-mile racetrack with us 40 lunatics running around in a tight circle. With the fans, the atmosphere there always makes for a good time, and sometimes a frustrating time when things don’t always go your way.”

Yes, the frustration, I think we all love that part of NASCAR. Anger, shoving and maybe some punching. Have we seen a fight this season?

Some people I know like the wrecks, but I prefer drivers getting into it. It’s historically correct and has been happening on every local track we ever saw racing growing up. Have at it boys, until NASCAR tells you to knock it off.

These last two races to start the playoffs using the 750 HP package have been a good tool to know who is going to be good not only for this week but also at the season finale in Phoenix when the same package will be used.

Can Clinch Via Points (via NASCAR Media)

If there is a repeat winner or a win by a driver who cannot advance to the next round, the following drivers could clinch by being ahead of the 11th winless driver in the standings. The same point requirements listed below would hold true if a new win comes from among Kyle Larson, Joey Logano, Ryan Blaney, Kevin Harvick, Chase Elliott, Christopher Bell, Brad Keselowski, Kyle Busch or Aric Almirola.

The following drivers could clinch on points with a win by Kurt Busch, Alex Bowman, Tyler Reddick, William Byron or Michael McDowell:

Can Clinch Via Win

The following drivers would clinch on their win alone: