The best aspect of Saturday’s Bass Pro Shops NRA Night Race at Bristol Motor Speedway is that four of the 16 championship-eligible drivers will be eliminated from competing in the Playoff’s Round of 12 which begins next week at Las Vegas Motor Speedway.

None of the drivers want to get chopped, so they will do just about anything to scratch and claw for a win. 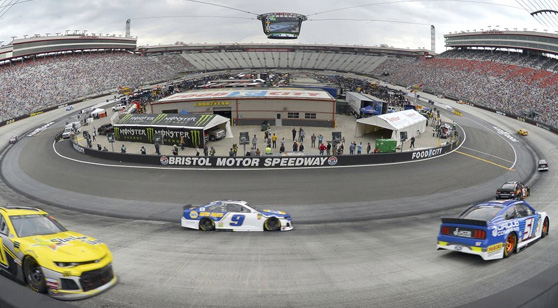 The NASCAR Cup Playoffs will make a return trip to Bristol this weekend for a race under the lights. (AP)

There will be little fights for position everywhere all race long with only three drivers having already clinched passage to the next round. With the tight surroundings of Bristol’s high-banked half-mile layout where there’s little room to move among the 40 drivers, a few drivers are going to have their feelings hurt when they get punted for position and we should see some fisticuffs after the race.

It’s a high-intensity moment, and not just for the Playoff drivers trying to advance.

There are a few drivers like Erik Jones who don’t have a ride for 2021 yet and they need to use these next eight races of 2020 trying to lure an offer. Jones, who is offered by William Hill sportsbooks at attractive 30/1 odds to win, has the best shot among lame-duck drivers.

He’s got Joe Gibbs Racing equipment, he’s won twice at Bristol in the Xfinity Series, and has three top-fives in seven Cup races there, including fifth-place in the May race.

No driver has been announced for the 2021 No. 48 ride for Hendrick Motorsports. Maybe a win Saturday night could get him an interview.

Because of all the above, I have a bet on him this week.

The Westgate Las Vegas SuperBook made Denny Hamlin and Chase Elliott co-favorites at 9/2 odds (Bet $100 to win $450) to win. Hamlin won the fall race last season, led a race-high 131 laps in the May race, and was fifth in the July All-Star Race held there.

However, he has yet to score a top-10 in the two Playoff races at Darlington and Richmond, two of his best tracks. Hamlin knows issues that need to be cleaned up.

“We need to make sure we don’t make any mistakes on pit road or elsewhere,” he said. “We had some pit road issues the last two races, and both kept us from contending even though we had a fast car.

Our team will work this week to get the best and fastest car out on the track and will hope to end up in Victory Lane.”

Hamlin has two wins and nine top-five finishes in 29 Cup starts at Bristol and should have more success Saturday night.

“You always have confidence returning to a place where you’ve had success, and Bristol is no different,” Hamlin said. “We can definitely win there again.”

Elliott won the first two stages and led 88 laps in the May race and got tangled up in the tight confines with five laps to go while leading and finished 22nd on the lead lap. When the series came back for the All-Star Race he led 60 laps, grabbed the checkered flag, and a big $1 million check.

NASCAR is using the race package with engines producing 750 horsepower. This will be the 10th race using it, including the non-points All-Star Race, and Elliott has been a star with it notching two wins (Daytona road course). He was fifth with it last week at Richmond.

Two straight for the #2 Team?