The 2021 NASCAR Cup season has its first event scheduled Tuesday night with the Busch Clash racing on the 14-turn, 3.61-mile road course for the first time since the non-points invitational event began on the Superspeedway in 1979.

It’s 21 of the best drivers getting a head start over the rest of the field in what is going the most road coursey NASCAR season ever with seven road races planned among the 36 points-paying races. I’m not sure how I feel about it, but a prominent Las Vegas bookmaker was excited about the change.

Last season with no practice it was the Kevin Harvick and Denny Hamlin show combining to win 10 of the 20 races on tracks using the race package featuring engines producing 550 horsepower. The cars used Tuesday night will be the 750 hp package.

I usually don’t get a craving for road racing until May after seeing only left turns for a couple of months.

I crave the crapshoot of Daytona in the Clash, the Duels, and the Daytona 500 after a long winter of no racing. Salmons again came with the logic that made sense.

“We already have the duels and 500, why do we need another wreck-fest,” he said. 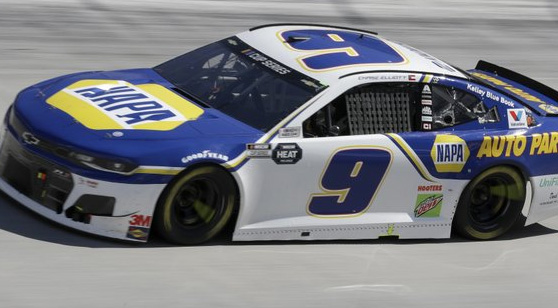 Chase Elliott is a solid contender on the NASCAR series and is the favorite to win Tuesday's Busch Clash from Daytona. (AP)

Whatever the case may be, I think we can all agree we’re just happy to see NASCAR back after an improbable 2020 season that fought through a pandemic to be the first live sport in action on network TV after the USA shutdown.

Even better is being able to bet it with relatively no changes to the cars that raced last season. All the notes we made from last season should apply to 2021.

The key thing about road races is that it’s an elite company with road skills -- turning right and left -- that wins on them, especially lately with Chase Elliott and Martin Truex Jr. winning all five of them the last two seasons.

So let’s break down a few of the top contenders to win on Tuesday night using odds posted by the SuperBook.

The 2020 Cup Champion has started 12 races on road courses and won five of them making him the active leader in road wins. He won the inaugural NASCAR Cup race on Daytona’s road course last season leading a race-high 34 of the 65 laps. He has won the last four races on road courses, so yes, he’s the best and may still have value at +225.

His 2016 win at Watkins Glen remains his only road course Cup win, but he seems to be racing for the win in all of them the last five years -- seven top-fives in his last 12 road course starts which includes runner up on the Daytona course last season.

In 42 Cup races on the roads he's averaged a 12th-place finish with two wins and 10 top-fives. His last win on one was 2017 at Sonoma. In his Daytona road course debut last season he was 17th.

“We ran poorly there last year, so it’s definitely been on our radar to get to the Busch Clash just because we have a number of things we want to incorporate into our car,” Harvick said. “To be able to have those reps and kind of do a quality control check on where you’re at with your race car gives you a lot going into week two of the season to make sure you’re competitive and where you need to be.”

For whatever it’s worth, Harvick’s sponsor is Busch beer, the sponsor of the Clash.

He’s tied with teammate Truex for second among active drivers with four road course wins. He has 11 top-fives in 34 starts, but his last win on one was 2015 at Sonoma. He’s been 30th or worse in his last three road starts -- 37th at Daytona last season. He might be a driver to bet against here. Brad Keselowski is matched up against him (-110) at the SuperBook, something to possibly explore.

No Cup wins in 24 road starts, but he does have six top-fives and is a three-time runner-up at Watkins Glen. He was 13th on the Daytona road last season.

This is a guy to take a serious look at when betting. In 12 Cup starts on the roads, he has one win (219 Roval), four top-fives, and seven top-10s. He was fifth on the Roval last season but was 31st at Daytona’s course. He’s matched up against Harvick at the SuperBook laying only -110.

His lone road win came at Watkins Glen in 2015 and he has five other top-fives between his 26 Cup starts. Last season he had a rebirth into success with a ninth on the Daytona road course and runner-up at the Charlotte Roval during the playoffs.

He and crew chief Greg Ives move over from the No. 88 ride to Jimmie Johnson’s old home which includes continuing a relationship as Ally as the sponsor. Bowman was 12th on the Daytona course last season followed by an eighth at the Roval. Two top-fives in 12 road starts. But I would need 30-to-1 odds to bet him.

This is a driver to search around for the best odds on, better than the SuperBook’s 14-to-1 offering. He’s been eighth or better in his last three starts between the Roval (sixth, twice) and the Daytona layout, both of which feature the steep banks on the oval. He’s led 71 laps between his last five road starts. Byron is matched up at the SuperBook against teammate Bowman (-110) which is a good bet.

He’s been sneaky good on road courses in his Cup career, but was it more about the car he drove? He had top-10s in six of his 10 Cup starts but that was Joe Gibbs Racing equipment. Now he’s driving the No. 43 for Richard Petty. But road racing is more about driver instinct than horsepower which is why I think he’ll have a good race.

New rules this season allow for stage winners to qualify for the Clash and Dillon won a stage last season, so he’ll be driving the Toyota co-owned by Micahel Jordan and Denny Hamlin because Bubba Wallace didn’t qualify. Denny Hamlin tweeted an explanation saying “Very important for our team to get reps.

This will be a crucial race for us to get just that. Special thanks to @tydillon for stepping in!” Dillon has a 24th-place finish in 10 road course starts, but he’s had a car this good. I’m expecting the No. 23 to be extremely competitive this season while using JGR Racing equipment with engines produced by Toyota Racing Development.