Oh boy, we’ve got ourselves at Saturday night special on the high banks of Daytona International Speedway’s 2.5-mile tri-oval and I don’t think I’ve been excited as much for a race since the season-opening Daytona 500 in early February.

It’s not just the nuances of superspeedway racing where almost every car has a legitimate shot to emerge from the large front pack to win, but it’s also compounded with the regular season ending and all the storylines happening that will surely impact the type of racing we’ll see throughout the night.

Forget the Firecracker 400 as we’ve known the summer Daytona race annually since 1959, it’s the Coke Zero Sugar 400 now in late August as the gatekeeper to the Playoffs.

It’s desperation time for drivers like Austin Dillon, Ricky Stenhouse Jr., Matt DiBenedetto, Chris Buescher, Ross Chastain, Bubba Wallace, Erik Jones, Daniel Suarez, Ryan Newman, Cole Custer, and Chase Briscoe. They have to win Saturday to advance to the playoffs which begin next week at Darlington Raceway. Dillon can technically get it on points as he sits 28-points behind teammate Tyler Reddick who sits 16th in points, but if a new Cup regular wins they would take over the 16th and final playoff slot.

The dynamics of an already spicey superspeedway racing becomes even more intense with the season on the line. Dillon (21/1 at Circa Sports), Stenhouse (32/1), Jones (110/1), and Newman (90/1) all have past Cup wins at Daytona and know this track gives them their best chance to win after 25 races.

We can believe that Wallace will find his way near the lead of the pack as we often see him in superspeedway races. He’ll make some daring moves and try some new tricks just to say to himself he left everything on the track and tried everything. Circa Sports thinks highly of Wallace and is offering only 19-to-1 odds to win while Caesars sportsbooks are offering 30-to-1. He’s got the car and the driving ability to win on a superspeedway. In most races, he’s 300-to-1 or higher to win.

All those drivers trying to get in will have the same approach as Wallace. Making the playoffs or not is a big checklist item for every team deciding future plans with their current driver. For some like 2008 Daytona 500 Newman, it could be his last race at Daytona as he ponders his future. He’ll give it his all and Roush-Fenway Racing Fords have been very competitive on superspeedways the last 12 years.

When I say anyone can win, I mean anyone. In between three Denny Hamlin Daytona 500 wins since 2016, Daytona has produced longshot winners like Micheal McDowell in February’s Daytona 500 for his first career Cup win. Justin Haley won his first Cup race at Daytona in the summer of 2019. It’s because of the parity at Daytona that not many long-shot odds are offered while also eliminating the big favorite. Hamlin was double-digits in odds-to-win with all three of his Daytona 500 wins.

Daytona and Talladega are the two superspeedway tracks and the same randomness finds its way into both box scores and the races are booked similarly by the sportsbooks. No big favorites, but no juicy long shots either because they can really win. It’s the volatility of both tracks that makes it tricky for the bettor and a different betting approach should be used than normal races.

Driver ratings for a driver drop significantly for superspeedway races because of the volatility where they’re more susceptible to finding a wreck at any time not of their own doing than other tracks like Michigan. Driver ratings hold true at Michigan and driver match-ups should be bet. But you couldn’t get me to lay even money that Kyle Larson will finish better than Austin Dillon or Rickey Stenhouse Jr. at Daytona. Stretch your bankroll on odds to win wagering with six or seven drivers while eliminating your normal match-up or prop play.

The Daytona 500 had seven cautions and there were 22 lead changes among 13 drivers with fifth-place finisher Hamlin leading the most laps (98). McDowell led one lap, the only lap that mattered -- the last lap. Chase Elliott was runner-up for his second straight Daytona race, Dillon was third and two-time Daytona winner Kevin Harvick was fourth.

Harvick is an interesting look again this week and Circa Sports is offering 16/1 odds to win. He led the series with nine wins last season and doesn’t have any so far in 2021. While his cars have been mostly junk, he’s been very good in the two superspeedway races leading laps in each and also finishing fourth at Talladega. Six top-fives in 25 races and two-for-two on superspeedways. He’s actually sitting in that group with Stenhouse and others that know their best chance to win is this wild type of racing where all cars are equal.

He doesn’t need to win because he’s clinched a spot on points, but perhaps he needs a win mentally to catapult himself into the Playoffs with some momentum. He says the key in these types of races is being aggressive.

“You have to be aggressive just for the fact that if you’re not aggressive, it always seems like you’re not going to be where you need to be,” Harvick said. “Nine times out of 10, the aggressor is going to be the guy who comes out on the good side of things just for the fact that you’re making things happen and you’re not waiting for something else to happen. When you wait for something else to happen, that’s usually when you get in trouble because it’s usually someone else’s mess. You can still get in trouble if you’re aggressive, but with this rules package and the way things are, it’s best to stay aggressive and try to stay upfront.”

It’s funny, I was rooting against Harvick a lot last season because he was the short favorite in most races, but I’m rooting for the veteran driver now to get a win and I’ll have a top-tier bet on him this week.

Another top-tier wager will be on Denny Hamlin who Circa Sports has listed as the +958 favorite. In addition to his normal exploits at Daytona to start the season, he also led the most laps (43) at Talladega in April but got involved in a late wreck with Chase Elliott, Martin Truex Jr., William Byron, and Alex Bowman. 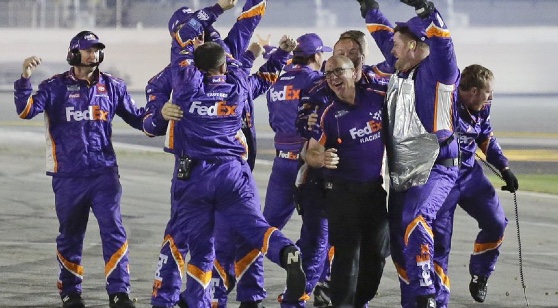 Denny Hamlin's crew celebrates a Daytona victory in 2020, a place he has won multiple times and enters as Saturday's favorite. (AP)

“Daytona’s been one of the best tracks for me,” Hamlin said. “I’ve won the 500, and I’d love to win the Coke Zero 400. I’m a Coke driver and I have not yet won that race. We seem to put ourselves in contention each and every year at Daytona, so we always look forward to racing there. And because my playoff spot is clinched, I can go on offense. I’ve got nothing to lose.”

Yes, offense. That’s what I want to hear from a driver I have a wager on. “Nothing to lose” also sounds desperate and I like that. He is desperate. No wins in 2021 after seven wins in 2020.

The thing about Hamlin is he gets great JGR Toyotas to work with on superspeedways while also being the best driver on superspeedways, even though Brad Keselowski leads all active drivers with seven superspeedway wins. Hamlin has four superspeedway wins, but his ascent to the front almost always happens and he stays there and more importantly stays out of the trouble happening behind him. He’s led laps in his last six superspeedway starts and his 1,017 laps led between Daytona and Talladega leads active drivers which is 293 laps more than second-most Kyle Busch who has more starts. Hamlin manipulates the air to help propel him on a pass better than most.

Another top-tier driver for me is 2018 Daytona 500 winner Austin Dillon because he’s been very good in his two superspeedway starts this season, and he’s been good on those tracks most of his career which also includes a 2015 Xfinity Series win. Like Hamlin, he has nothing to lose. He’s desperate, the last chance to make the Playoffs. He basically has to win, and I like that knowing Richard Childress Racing has an amazing superspeedway program. If Dillon has a chance to win by dumping the driver in front of him, I have no doubt he’ll do it and worry about repercussions later after he’s made the Playoffs and won my bet for me. Dumping the guy in front is how he won his Daytona 500. Caesars is offering 25-to-1 on Dillon to win.

Aric Almirola was the driver Dillon dumped to win the 2018 Daytona 500 and I’ll have a small bet on him here. Two of his three career Cup wins have come on the superspeedways. The Stewart-Haas Racing program has been solid with the superspeedway program which also makes Custer (65/1) and Briscoe (90/1) contenders.

Team Penske has been great on superspeedways which includes Keselowski’s only win this season at Talladega. His lone Daytona win came in the summer race. Circa Sports is offering him at 16-to-1 odds to win. Two-time Talladega winner Ryan Blaney is being offered at 19-to-1, something to consider, as well as 2015 Daytona 500 winner Joey Logano at 13-to-1 odds.

My medium-tiered bets start with Chase Elliott at 11-to-1. His only wins this season have been on two of the six road courses run this season. But he was good enough to win at Daytona in February and his only superspeedway win came at Talladega. Hendrick Motorsports has this program figured out, and they start from the pole again with Larson.

No bet is a bad bet this week until it loses. There’s nothing wrong with throwing darts to help the handicapping process. Daytona is a crapshoot mixed with jarts, darts, spades, corn hole, jacks, and the ‘what number am I thinking’ game all rolled into one.

How did McDowell win the Daytona 500? Well, my buddy had it handicapped perfectly because along with McDowell always being his best at Daytona, my friend’s favorite number is 34 because of Earl Campbell and Walter Payton. There it is. Simple as that.