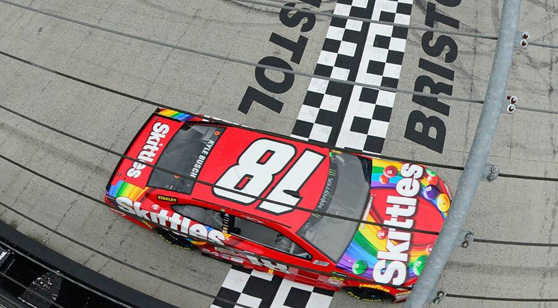 Kyle Busch and the No. 18 team have had plenty of success at NASCAR's Bristol venue and he's a top contender for Sunday's Supermarket Heroes 500. (AP)

Sunday’s Supermarket Heroes 500 at Bristol Motor Speedway will be the ninth NASCAR Cup Series race of 2020, and fifth since restarting the season two weeks ago.

What’s makes this race unique from a betting perspective, probably more than any Bristol race I’ve ever bet, is that there is an extreme unknown factor putting the bookmakers and bettors both at the same disadvantage.

There are no practices or qualifying and they’ll be racing with the race package featuring engines with 750 horsepower and a shorter spoiler that has raced only once this season, at Phoenix Raceway, the last race before the nation shut down.

The Phoenix race won by Joey Logano is a good starting point to review. We saw four drivers lead at least 60 laps, three of which had more then Logano. There were 20 lead changes altogether with Team Penske showing some strength, but Stewart-Haas Racing saw all four of its drivers finish ninth or better led by Kevin Harvick who was runner-up.

The flat 1-mile spread at Phoenix races different than Bristol’s high-banked half-mile concrete layout, but from a performance perspective, it’s almost all we have to reference.

While I feel Chase Elliott, Brad Keselowski, and eight-time Bristol winner Kyle Busch should be the drivers to beat, the unknown factor has piqued my interest, the greed interest. Part of it is due to Phoenix and part of it is due to past history.

How about I try and make a case for Matt Kenseth to win? Sure, he’s looked rusty at times since taking over the No. 42, but Bristol is one of his best tracks over his career with four wins, and 15 top-five finishes which is tops among active drivers. He’s led 1,583 laps, second-most among actives, and has completed almost 95 percent of the scheduled laps with just four DNFs in 36 starts.

Kyle Larson started the season in the No. 42 for Chip Ganassi Racing and last fall at Bristol had run the fastest laps during the race and finished sixth. In the March Phoenix race, Larson finished fourth using the race package Kenseth will be using this week.

But it’s the perceived rust factor that allows us to get 50/1 odds or higher on the 48-year old to win -- unless you bet in the Washington D.C. area that just got a lousy sportsbook operator.

The other driver that has long odds is Clint Bowyer who has run great at Bristol, but I like him more this week due to his fifth-place at Phoenix and all his SHR teammates finishing in the top-10 with this 750 horsepower package. Bowyer loves this track.

Bowyer has finished eighth or better in his last four Bristol starts and had a career-best runner-up in 2017, his first season driving for SHR. He’s got seven top-fives in 28 starts, and he’s been close to winning in at least four of those.

Kevin Harvick is a two-time Bristol and I’ve always believed he should have a few more there because it fits him perfectly. I still feel like I was robbed in 2001 when as a rookie he led 137 laps and had the best car but lost to Elliott Sadler who appeared to use the same set of tires that didn't lose grip the entire race.

Harvick has been runner-up five times since then and 12 total top-fives overall which is tied with three others for second-most among active drivers. The SuperBook has him at 8/1 odds this weekend.

The favorites to win this week are Kyle Busch and Chase Elliott at 9/2 odds (Bet $100 to win $450) which says a lot about Elliott’s rise and to some degree Kyle Busch’s fall. He is winless and hasn’t led a lap since the Daytona 500 which ironically turned out to be his worst finish (34th) so far. But Busch has this place figured out.

“Bristol is kind of a finicky place,” Kyle Busch said. “You’re used to running on asphalt every week and so the concrete can throw you for a little bit of a loop. But that place ages and the track changes, there are some little nuances that change with the racing surface and the line, they’re always changing something. We had the old concrete there and then they went to this progressive style concrete and then they ground the top and then they spread the PJ1 on the bottom, and now you run the bottom but you end up going back to the top at the end the race.

“It’s just paying attention to days leading up to it, with the Xfinity race or Trucks in the fall and getting your eyes on the track and seeing what it’s doing,” Busch continued. “We won’t have that luxury now, but we’ll obviously be paying attention to how the race starts and which way track is trending with our Skittles Camry.”

More uncertainty in all facets of this race.

Elliott’s 11th-place average finish at Bristol is the best among active drivers and he led six times for 93 laps at Phoenix using this race package. I don’t like the short odds, but I do like his roll coming off the Thursday Charlotte win.