The NCAA Tournament field of 68 is set, and we have a lot of intriguing matchups. Below, we'll look at some of the top teams in the region, some teams to avoid at all costs and players to watch.

WHERE TO BET ON MARCH MADNESS

Bryant heads into the play-in game against Wright State of the Horizon League looking to win and face the No. 1 seed Arizona in the South Region. While the Raiders had a tremendous run to win the automatic bid out of the Horizon League, Bryant has one thing that Wright State doesn't - Peter Kiss. The Bulldogs of Bryant sport the nation's leading scorer, as Kiss posted 25.1 PPG in his 26 games for the Northeast Conference champions.

While a lot of people found out about Bryant for the wrong reasons, after its NEC-clinching game against Wagner was paused briefly due to a fight in the stands, pay attention to the product on the floor. Kiss, Charles Pride and Luis Hurtado are a solid mid-major Big Three, and while they're not going to take down Arizona, this triumvirate is going to get its chance if it can top Wright State. Unfortunately for the Bulldogs, their first-ever NCAA Tournament game is in Dayton, Ohio, where its opponent's school is located.

Chattanooga dominated the SoCon this season, clearing Furman by two games for the regular-season title, then pushing past the Paladins in the conference final to seize the automatic bid. Malachi Smith and David-Jean Baptiste are a nice one-two punch for the Mocs, and Illinois will be on upset alert in their opening-round game, although Kofi Cockburn isn't likely losing much sleep over the Mocs, at least yet.

Last, but certainly not least, Loyola-Chicago is back in the Big Dance, and you know what that means - Sister Jean time! The 102-year-old super fan will be backing her Ramblers, and it's hard to feel as if there isn't some sort of divine intervention going for the Ramblers. Loyola burst (back) onto the scene with a scintillating run to the Final Four as an 11-seed back in 2018. Last season, the Ramblers went to the Sweet Sixteen before bowing out to a more Cinderella-er (yeah, I made that word up!) Oregon State team. So what can Loyola do for an encore? Well, Loyola gets a crack at NCAA Tournament perennial disappointment Ohio State, so the Ramblers could ramble on into the weekend, and then some. Are you betting against them?

The Wolverines of Michigan did play a very ambitious and difficult schedule this season. This was a team which was just four games over .500 at 17-13 SU during the regular season, and it was shown the door by Indiana in the first game of the Big Ten Tournament. But an 11-9 conference record, and a tremendous strength of schedule helped the committee justify Michigan for an 11-seed, and not even a play-in game. Now, head coach Juwan Howard's group will face Colorado State out of the Mountain West. Avoid the Wolverines, as they haven't had consecutive victories since Feb. 8-10, and the last time Michigan covered in consecutive games was Jan. 18-23. This is an inconsistent team which should be in the NIT, not the NCAA Tournament, and CSU will show them the door in the first round.

The Buckeyes of Ohio State deserved a spot in the Big Dance as an at-large team, as it hung around the Top 25 rankings for a good chunk of the season. But Ohio State sputtered down the stretch big time, including a head-scratching loss to Nebraska at home late in the season, and an exit at the hands of a mediocre Penn State team in the Big Ten tournament. This is a banged up team, and they're facing a Loyola Chicago team with a lot of confidence. This will be a popular 10-7 upset pick for the bracket nerds, and Loyola is actually slightly favored despite the double-digit seed. It's a shame for a great player like E.J. Liddell, but his team will not be alive very long.

The Big Ten hasn't had very good runs in the NCAA Tournament lately, and if Michigan and Ohio State bow out early, it could be another disappointing year. Chattanooga is very capable of ousting Illinois, too.

The Pirates of Seton Hall racked up 20 victories in the regular season, while going 11-8 in the Big East. The Pirates are an 8-seed taking on a sometimes powerful TCU side for the right to play Arizona in the second round. Seton Hall actually posted a 6-5 record in 11 true road games, while going 2-2 at neutral sites this season. While that's all well and good, this is a team which also endured a 4-8 SU stretch from Dec. 29-Feb. 16. Seton Hall was very inconsistent this season, and it wouldn't be a shock to see TCU sink the Pirates in the opening game.

The Wildcats of Arizona have a very favorable setup in a region which could see several upsets. The Wildcats get a crack at the winner of the play-in game between Bryant and Wright State, which should be a tune-up before squaring off with either Seton Hall or TCU. Neither of those teams figure to give the Pac-12 regular-season champ much of a problem, however.

The real trouble could start in the Sweet Sixteen if Houston or Illinois is able to take care of business and avoid the upset bug. The Cougars have the experience of a deep run in last season's tournament to tap into, while the Illini have the dynamic Kofi Cockburn, who can do it all in the frontcourt. When, not if, the Wildcats get to the Elite Eight, it could be Villanova in a battle of Wildcats, or perhaps Tennessee or Loyola Chicago looking for the upset and miracle Final Four run. Either way, Arizona is heads and tails better than any of the teams, as it is deep. From Bennedict Mathurin in the backcourt, to Azuolas Tubelis and Christian Koloko in the frontcourt. If Kerr Kriisa is back from an ankle injury, and this team is back to 100 percent health, look out.

WHERE TO BET ON MARCH MADNESS 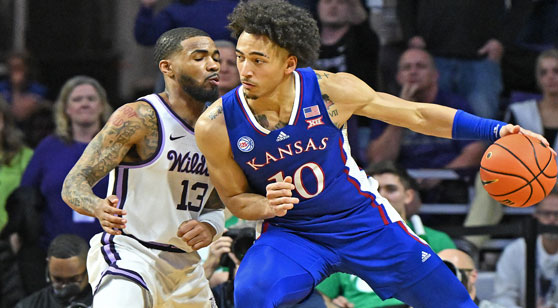