This Tuesday night’s college basketball betting board features a pair of matchups in the Big 10 and the Mountain West.

As one of the early games on the board, the No. 18 Iowa Hawkeyes will be on the road against the Michigan State Spartans. Closing out the night’s betting action, the Colorado State Rams will be in San Diego to face the No. 4 San Diego State Aztecs coming off their first straight-up loss of the year.

Iowa is 10-6 SU in Big Ten play and two games in back of Maryland for the regular season title. This is part of a 19-8 record on the year. The Hawkeyes are 3-1 both SU and against the spread over their last four games with last Thursday’s 85-76 victory against Ohio State as two-point home favorites. The total has gone OVER in seven of their last 10 contests.

Luca Garza continues to lead the way for Iowa this season. The junior center is averaging 23.7 points and pulling down 9.6 rebounds a game. He put up 24 points in his last start after scoring 38 in a recent win against Indiana on Feb. 13.

The Spartans beat up on Nebraska 86-65 as 12-point road favorites last Thursday but this was just their second SU win in the last six games. It was also the first time they covered in those six games. The total went OVER 150 points against Nebraska after staying UNDER or ending as a PUSH in 10 of their previous 11 games. Michigan State is 18-9 SU (12-15 ATS) overall with a 10-6 record in conference play.

Cassius Winston had 23 points in last Thursday’s win. The senior guard has led the way all season with 18.3 points per game.

-- The Hawkeyes are 2-4 both SU and ATS in their last six road games. The total has gone OVER in three of the last four games played on the road.

-- The Spartans have lost their last two home games SU and ATS after winning the previous eight SU and the pervious seven home games ATS. The total has stayed UNDER in their last five games at home.

-- This will be the only meeting in the regular season. Michigan State has won eight of the previous 10 meetings SU but Iowa has the slight 6-4 edge ATS. The total gone OVER in three of the last five games between the two. 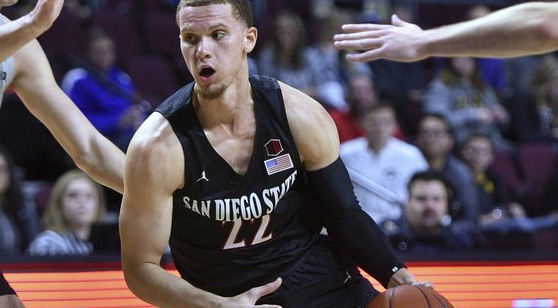 Since a late-January loss to Utah State, the Rams have gone 5-2 SU in their last seven Mountain West games. They got past San Jose State 78-71 on Saturday as heavy 16-point home favorites. This dropped their record to 2-6 ATS going back to the loss to Utah State. The total has stayed UNDER in their last two games after going OVER in their previous five contests. Colorado State is 10-6 SU in conference play as part of its 19-10 (13-15 ATS) record on the year.

The longest SU winning streak in the nation came to an end on Saturday with the Aztecs coming up just short in a 66-63 loss to UNLV as 14 ½-point home favorites. They did win their first 26 games SU while going 17-9 ATS overall. The total has stayed UNDER in their last three contests after going OVER in their previous five games. San Diego State is averaging 75.4 PPG with four different players averaging at least 10 points a game. The defense ranks fourth in the nation in points allowed (58.5).

-- The Rams have a SU 2-5 record over their last seven road games as underdogs but they do improve to 3-2 ATS in their last five games getting points on the road. The total has stayed UNDER in seven of their last nine road games.

-- San Diego State is 7-3 SU with a 6-3-1 record ATS in its last 10 games against Colorado State. The total has gone OVER in three of the last four meetings.