The Alabama Crimson Tide look to continue their hot streak with a tough road game against the LSU Tigers. Tip for this SEC showdown is set for 9 p.m. (ET) and will air on ESPN2 from the Pete Maravich Assembly Center. 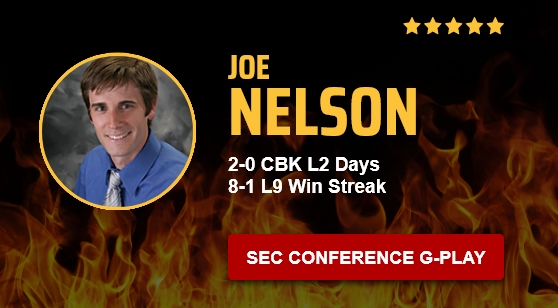 WHERE TO BET ALABAMA-LSU

The high point total immediately stands out, set at 162.5 with two high-powered offenses. LSU has gone OVER in seven of 12 games this season, and scores the 10th-most points per game in the country.

LSU is the small home favorite, given a -1-point spread which has actually gone up to -2 with some sportsbooks. The Tigers have only covered five times this season, while Alabama has covered nine games this season.

There is so much to like about this Alabama team, as coach Nate Oats is showcasing that Buffalo offense that averaged over 80 points per game. Alabama averages 80.1 points per game, which ranks 45th-best in the nation.

The Crimson Tide have Jaden Schakelford, Herb Jones and Jahvon Quinerly who all average 12.5 points per game or more. John Petty is back and has already won SEC Player of the Week and set a record for career three-pointers at the school.

The bookmakers and polls haven't caught on to how lethal this team actually is, struggling early in the season but now in full command of a dangerous offense. Alabama also has the 75th-most efficient defense in the nation, with a 93.4 rating overall. They average the 32nd-most steals per game (8.7), the 96th-most blocks per game (3.9) and 24th-most rebounds per game (41.1).

They also attempt the 17th-most field goals per game (64.6) and the 10th-most three-pointers per game (29.8). Alabama can win in more than one way, but as Nate Oats teams have shown it usually begins with a high-running offensive attack.

LSU has just as good, if not better, offense than Alabama does. The Tigers average the 10th-most points per game and hold the 11th-most efficient offense in the nation.

The issue for LSU is defense, allowing 71.3 points per game which ranks 206th nationally. This is why the point total is very high, because of two good offenses and LSU's lack luster defense.

LSU is just abysmal from the paint, as they rank 278th in blocks per game despite averaging the 13th-most steals per game nationally (9.3). Cameron Thomas averages over 20 points per game, while Trendon Watford is not far behind. These two are the main reason LSU has a top 10 offense, but Javonte Smart is the quarterback.

Smart averages four assists per game with 15.2 points. Darius Days averages a near double-double, but sees a low 0.3 blocks per game. LSU has no issues rebounding, but the lack of height does hurt in the defensive post. If Alabama settles for threes they will lose this game (unless they are hitting them).

Alabama's best bet to win is to drive to the rim every play, then play from inside-out. If this occurs expect a track race to the finish line in what could be a fun offensive showcase in Baton Rouge.

Inside the Stats – LSU Tigers

It's hard to pick against either team here, but especially Alabama who has both the momentum and odds favoring them here. Overall, the point total is high but worth a shot on the OVER. LSU and Alabama should each touch 75 minimum, which means only few buckets could see this go OVER.

The offensive production from both teams, points allowed by LSU and O/U trends all favor the OVER here. As for a winner, perhaps Alabama at +2 is worth a look over LSU -1, depending which odds you can get. This is such a close call, but its hard to ignore Alabama winning three of its last four games by double-digit point totals.

If you can get Alabama for plus-points then grab them, but the OVER seems to be the better play between both markets.