The first-place Alabama Crimson Tide (18-5, 13-1 SEC) battle the second-place Arkansas Razorbacks (17-5, 9-4) in Fayetteville and the game is televised on ESPN2. Alabama could clinch a share of the SEC title with a win.

Alabama is steaming ahead, looking to sew up at least a share of the SEC regular-season title with a victory in Arkansas. They have just three scheduled games remaining, although they could still add one more game, either a make-up against Texas A&M or another opponent. Either way, they would likely be doing so as champs.

The Crimson Tide have rolled up three straight wins at South Carolina, against Georgia and against Vanderbilt, but they have covered just once in the three-game span. Their most recent loss came at Missouri on Feb. 6, a 68-65 loss as three-point favorites, which is also the last time the UNDER cashed for them.

These teams met in Tuscaloosa back on Jan. 16, and it was the Crimson Tide dropping down the hammer and coming away with an impressive 90-59 victory as 2.5-point favorites as the UNDER (163.5) connected. The Tide spread the wealth in that game, as John Petty Jr. (17 points), Jaden Schackleford (16) and Herbert Jones (13) each hit double digits, and seven different players had seven or more points in a balanced offensive effort. Juwan Gary also swapped three shots off the bench. Gary will be sidelined at least another two weeks due to a shoulder injury, however.

Arkansas has been on a serious roll lately, too, picking up seven straight wins inside the league since that beatdown at Alabama, and their lone loss since Jan. 16 is an 81-77 loss at Oklahoma State in the SEC/Big 12 Challenge. They enter this game 4-0 ATS in the past four, and 6-1 ATS (6-0 ATS in the past six in the SEC). 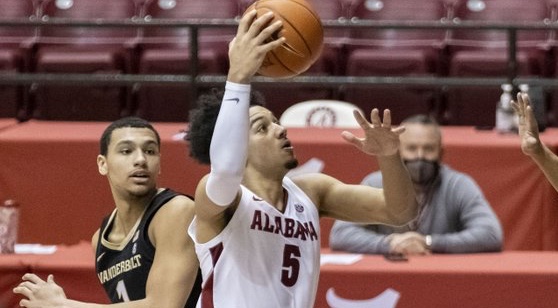 The Alabama Crimson Tide have been one of the biggest surprises this season, fighting for a No. 1 seed in March Madness. (AP)

The Crimson Tide have rolled up 81 or more points on offense in each of the past three outings, including a 115-point outburst against Georgia on Feb. 13. The OVER has connected in three in a row for Bama after a four-game UNDER run from Jan. 26 to Feb. 6.

Alabama finds themselves in an unusual spot this season, as they're slight underdogs for the first time since Jan. 12 at Kentucky. They won that game 85-65 as three-point underdogs, although the Hogs are a much more powerful team than Big Blue this season. They also won their other game as a 'dog this season, posting a 71-63 win at Tennessee on Jan. 2 as 10.5-point underdogs.

The Crimson Tide have registered 80.9 PPG to rank 22nd in the nation despite hitting just 43.7 percent from the field to rank 202nd. They're a decent three-point shooting team at 36.0 percent, or 78th in the country, although it all depends on the night if the shots are falling or not. They're just so-so at the free-throw line, hitting 72.1 percent to rank 132nd.

On the defensive end, it's hard to beat Alabama with the three. They're allowing 70.5 PPG to rank 195th, but they're 40th in defensive field-goal percentage (40.5) and a solid 16th in three-pointer defensive percentage (29.2).

Arkansas picked up a nice resume-building win against Florida last time out, on the heels of an impressive 86-81 overtime win at Mizzou on Feb. 13. In all they have won and covered four straight, as they make a late-season push. They'll likely come up just short in pursuit of a regular-season league title, but they're improving their seeding for the SEC Tournament by the day, and will be a tough out come NCAA Tournament time.

The Razorbacks have been impressive on their home floor, topping Florida last time out, moving to 5-0 SU/4-1 ATS in the past five since a setback in Fayetteville on Jan. 2 against Missouri. And as a favorite of 4.5 or fewer points, Arkansas has posted a 3-0 SU/ATS mark in three games against SEC opponents this season.

It isn't Nolan Richardson's "40 Minutes of Hell" in Arkansas, but it's looking quite similar to those halcyon days of Hogs Basketball. The Razorbacks are rolling up 82.5 PPG on offense, ranking 12th in the nation, while ranking a decent 56th in free-throw shooting at 74.8 percent. On the offensive end, they jack up a lot of shots, but are hitting just 45.0 percent from the field for a mediocre 126th ranking, and they're 171st on threes at 33.8 percent.

Defensively, Arkansas isn't very good, as they basically just try to outrun and outscore everyone. They're allowing 70.1 PPG, which isn't terrible, but also isn't great at 183rd in the country. They're 89th in defensive field-goal percentage at 41.5, and 87th against the three at 31.7 percent.

Inside the Stats – Arkansas Razorbacks

We have seen these teams play once this season, and it was a one-sided affair, with the Crimson Tide running the Razorbacks out of the gym in a 90-59 rout in Tuscaloosa as 2.5-point favorites as the UNDER (163.5) cashed. But Arkansas is playing much better basketball these days.

The Crimson Tide saw Juwan Gary serve as a dominant presence down low, but he isn't available for this game. That will help Arkansas get inside more. They should be able to play better on their home floor, too. Alabama has plenty of chances to grab that regular-season crown, but it won't happen in this one. Arkansas stays alive for at least one more day.