A massive Mountain West game sees the Boise State Broncos take on the San Diego State Aztecs. Tip for this conference showdown is set for 9 p.m. (ET) and will air on FS1.

San Diego State enters the first of a two-game series as the favorite, given a -6.5-point spread. The Aztecs have covered 12 of 20 games this season, while Boise State has covered in 13 of 21 games.

The point total is set at 136.5, which both schools slightly go OVER when combining both O/U's. Boise State has gone OVER the point total in 12 of 21 games, while San Diego State is split at 10-9-1. 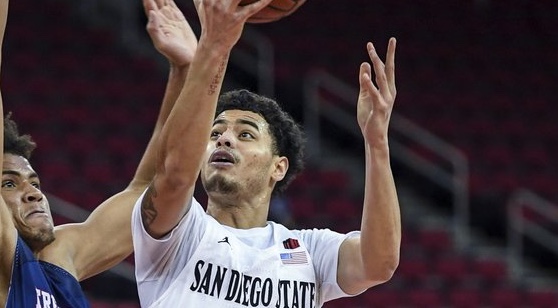 Boise State enters as one of the more balanced teams in the nation. The Broncos have the 24th-most efficient defense that allows 65 points per game, while also holding an offensive efficiency rating of 110.4 that scores 77.8 points per game. The big question is can Boise State win big games, consistently, on the road?

They took Houston to the wire, losing by 10 before beating BYU on the road. They lost to Colorado State before beating them two days later in Moby Arena. Also, they lost back-to-back road games against Nevada, so there is a certain lack of conviction that comes with Boise State on the road.

Derrick Alston, Abu Kigab and Marcus Shaver will need to continue scoring at a high-rate to break through this Aztec defense - a dangerous trio of senior scorers. Note that Rayj Dennis is close to averaging 10 points per game, and might be someone to keep an eye on should the Broncos need a spark from someone outside the main three.

Also bear in mind that Mladen Armus is capable of providing 10 or more points on any given night. The depth is not the concern with Boise State as much as that depth stepping up when playing good teams away from ExtraMile Arena.

It's been a roller-coaster season for San Diego State, beginning with a huge home win against UCLA but then dropping a game to BYU inside Viejas. The Aztecs have found some solid ground, winning eight straight games although the concern with those eight games is lack of opponents.

During the eight-game winning streak, San Diego State has beaten up on Air Force, Fresno State, San Jose State and Wyoming. None of those teams come close to being considered a quality opponent, dropping two straight to Utah State prior to the eight-game stretch.

The voters have quickly forgiven a team that went 4-4 from Dec. 18 to Jan. 16 with losses to Colorado State, BYU and Utah State twice. Consider this the first true test for San Diego State and whether their No. 22 ranking comes with any actual merit.

It does seems that Matt Mitchell and Jordan Schakel have done a good job leading a team that lost almost all of its talent a year ago. This team is not as dangerous a they were a year ago, but a Top 25 ranking from the AP is a bit premature given the early season struggles this club went through.

San Diego State should cover the spread, but as stated already this is a team that is facing its first true test since mid-January. The Aztecs 59.6 points allowed per game is the culprit of destroying bottom feeders in the Mountain West. They have allowed over 60 points at home to Colorado State and Nevada.

Boise State's offense is probably the best in the conference, so they should see over 60 points. Assuming the point spread is accurate, the amount of points San Diego State should score at home should help elevate the point total to go OVER. Play the 22-19 O/U trends.