The No. 9 Iowa Hawkeyes head to Value City Arena this Sunday for a huge Big Ten showdown against the No. 4 Ohio State Buckeyes. Game time on CBS is set for 4 p.m. (ET).

Ohio State has been opened as a two-point home favorite for Sunday’s game with the total line opening at 162.5 points.

The Hawkeyes’ straight-up four-game winning streak came to an end with Thursday’s lopsided 18-point road loss to Michigan as five-point underdogs. They are now just 3-7 against the spread in their last 10 games. The total has stayed UNDER in their last six outings.

Iowa lost to Ohio State by four points as a 5.5-point home favorite on Feb. 4. It has lost four of its last six games against the Buckeyes both SU and ATS. The total has gone OVER in the last three meetings.

Ohio State slipped to 12-6 SU and 11-6-1 ATS in Big Ten play with back-to-back losses to Michigan at home and to Michigan State on the road. It was 10-1 SU and 9-2 ATS in its previous 11 contests. The total has gone OVER in four of its last six games.

The Buckeyes return to Value City Arena with a SU 10-2 record at home this season. They are 7-5 ATS with the total going OVER in three of their last four home games. 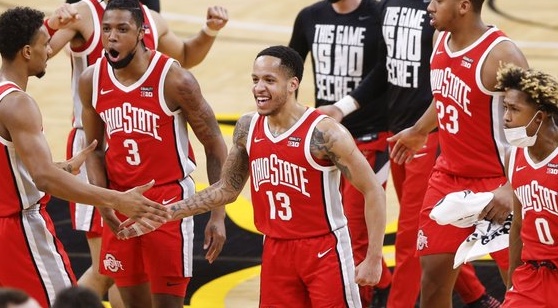 The Ohio State Buckeyes enter this home game fighting for a No. 1 seed in this year's March Madness Tournament. (AP)

All-American center Luka Garza scored 16 points with just four rebounds in the loss to Michigan. Far less that his season average of 24.3 points and 8.3 rebounds a game. This was the fourth time in his last five starts where he failed to reach his lofty scoring average.

Guard Joe Wieskamp is second on the team in scoring with 15.1 points per game. He is shooting an efficient 50% from the field and 48.3% from three-point range.

Iowa has been able to average 85.2 points this season with 40.7 rebounds a game. It is shooting 47.1% from the field and 40.1% from three-point range. There are four different players connecting on at least 50% of their shots.

Defensively, the Hawkeyes are holding opposing teams to 73 PPG. This average has dropped to 66.6 points over their last six games win or lose.

Ohio State will look to return to form on Sunday after dropping two straight games for the first time this season.

A big part of the Buckeyes’ success this season is tied to the elevated play of EJ Liddell. The sophomore forward leads the team in points (16) and rebounds (6.8). He scored a combined 41 points with 18 rebounds in those two losing efforts. He has exceeded his scoring average in his last four starts.

Overall, Ohio State is scoring an average of 78 PPG and shooting 46.4% from the field. This drops to 36.6% from three-point range. Led by Liddell, the Buckeyes are pulling down an average of 36.2 rebounds a game.

With both teams coming off losses their last time out, getting a win on Sunday becomes a higher priority as the regular season continues to wind down to a close. I give the slight edge to Ohio State playing at home both SU and ATS. I also see the Buckeyes as the slightly better team overall.

Given each team’s proven ability to put points on the board when it has to, I'm also going with the OVER on the total line. I think defense will play a smaller role in the final outcome.

WHERE TO BET IOWA-OHIO STATE