The Oklahoma State Cowboys (19-7) battle the top-seed Baylor Bears (22-1) in a showdown in Kansas City in the Big 12 Semifinals after the fifth-seed ousted fourth-seed West Virginia on Thursday. The game tips off at 6:30 p.m. ET on ESPN.

Oklahoma State rolls into this one with a lot of confidence after beating West Virginia not once, but twice, in the past six days. The Cowboys bumped off the Mountaineers 85-80 as 10-point underdogs in Morgantown to close out the regular season, and they sent the Mountaineers packing from Kansas City with a 72-69 win in the Big 12 Quarterfinals.

Oklahoma State hopes that the third time is a charm. The OVER has been the charm for Cowboys side bettors lately, hitting in the final five regular-season games before an UNDER result against West Virginia on Thursday.

Baylor has designs on a No. 1 seed in the upcoming NCAA Tournament, and they may have already done enough to secure one of the four top regional seeds. However, they could really bolster their resume, and perhaps take a run at the top overall seed, with a win over Oklahoma State and a conference tournament win in a very deep Big 12.

The Cowboys have been playing with an extreme amount of confidence lately, and doing well against teams not named Baylor or Kansas. They have also had a flare for the dramatic lately, winning two of their past six games in overtime, while five of the past six have been decided by five points or less, all in their favor. The lone exception, that 11-point loss at Baylor on March 4.

Oklahoma State also closed out the season with five straight OVER results before an UNDER in the quarters. The Cowboys were good for 76.7 PPG to rank 59th in the country, and they're a very good shooting team at 46.6 percent from the field to rank 55th.

That's the good news. The bad news is that Oklahoma State isn't a very good three-point shooting team at just 33.8 percent, or 179th in the land, and they're a dismal 71.1 percent from the free-throw line, good for 174th. That can make bettors pull their hair out in close games down the stretch when looking for OSU to close it out, or get valuable points late to cover.

Defensively, the Cowboys are not very good, either. They're 234th in the country with 72.3 PPG allowed. Surprisingly, teams hit 41.0 percent against them from the field, good for 55th overall, but they allow threes at a 32.2 percent clip, or 94th in the country. 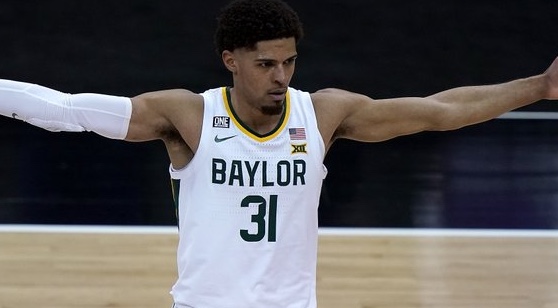 The Baylor Bears were able to win their first Big 12 Tournament game, but failed to cover their large spread by 14 points. (AP)

The Bears had that one lone loss at Kansas on Feb. 27, falling 71-58, and a lot of Baylor faithful were breathing a sigh of relief. They are going by the old adage that it's better to get that ugly loss out of the way now than now during tournament time.

Baylor fumbled its way past Kansas State on Thursday in the Quarterfinals, winning 74-68. They didn't come close to covering a 19.5-point number as the OVER (136.5) came through. While Baylor has been winning, they haven't been covering, going just 3-5 ATS across the past eight games overall. They haven't covered consecutive games since a 2-0 ATS run Jan. 23-27, and they haven't covered three in a row since Jan. 6-16. That isn't important here, as they didn't cover against K-State, but file it away in your notes for NCAA Tournament time when they face gigantic numbers.

Lately it's been all about the OVER for the Bears, as they have scored 81 or more points in three of the past four, hitting the OVER in all four outings. The OVER is also 10-1 across the past 11 games, including the most recent meeting with the Cowboys March 4. The first meeting Jan. 23 in Stillwater also hit the OVER.

The OVER results are no surprise since Baylor ranks third in the nation with 85.3 PPG, they're 13th overall in field-goal percentage (49.7) and they're the No. 1 three-point shooting team at 42.9 percent. If they have an Achilles heel, and it's a big one, it's at the free-throw line. They're just 68.6 percent from the line, or 244th, and that will be big once the intensity gets ratcheted up to extreme levels deep into the tournament.

The Bears won each of the two regular-season battles rather handily. You know what they say, it's never easy to beat a team three times in a season. Well, normally. In this one, Baylor gets it done going away.

Look for Baylor to continue dropping threes on Oklahoma State just like they did in the regular season. In the most recent meeting they hit 9-of-21 from behind the arc, while shooting 51 percent overall (30-of-59). They hit 10-of-24 on threes, or 42 percent, while knocking down 31-of-65 (48 percent) from the field. They scored 81 in both regular-season meetings vs. OSU. Consistency. It's what's for dinner in Waco.

WHERE TO BET OKLAHOMA STATE-BAYLOR