College basketball betting action in the Big 12 this Saturday gets underway at 1:30 p.m. (ET) on CBS with the West Virginia Mountaineers making the trip to Allen Fieldhouse in Lawrence to tangle with the No. 9 Kansas Jayhawks.

The Mountaineers are knocking on the door in the national rankings at 13-2 straight-up. They just knocked off Oklahoma State by 10 points this past Tuesday as 2.5-point favorites at home. A 15-point road loss to Texas as a 12-point underdog and a tight three-point win over Kansas State round out West Virginia’s 2-1 start in Big 12 play.

Kansas got tripped up by Texas Tech in its only conference loss against two SU wins over Oklahoma State and Iowa State. The Jayhawks snuck past Iowa State by one point on Tuesday night as heavy 13-point home favorites. Kansas is 13-2 SU with the other loss coming against Dayton back in late November.

Saturday’s clash should remain close right down to the final buzzer. West Virginia probably deserves to be in the Top 25 and Kansas remains one of the top teams in the nation. The Mountaineers let me down as a previous SU upset pick against Texas, but I remain confident that they can cover against the spread on Saturday.

West Virginia’s only bad loss this season was an 11-point setback against Marquette as a 5.5- point favorite early in the season. With the exception of the lopsided loss to Texas, the Mountaineers have been a reliable bet lately at 5-2 against the spread in their last seven games. They also failed to cover in the recent 71-68 win against Kansas State as nine-point home favorites.

Guard Taz Sherman continues to lead the team in scoring with an average of 19.9 points per game. He is shooting 43.9% from the field and 36.4% from three-point range. He is also one of the team’s better foul shooters at 78.5%.

Guard Sean McNeil (14.6 points) is another key contributor on offense. He is the Mountaineers’ most consistent shooter at 45.7% from the field and 40.8% from outside the three-point line. West Virginia, as a team, is averaging 69.7 PPG.

The team’s field goal percentage sits at 44%. West Virginia is shooting 32% from three-point range and 66% from the free throw line. It is pulling down an average of 34.3 rebounds with 11.4 a game on offense. At the other end of the court, the Mountaineers are allowing an average of 61.3 PPG.

Behind Baylor, Kansas is the second-highest nationally ranked team in the Big 12. However, the Jayhawks have not been one of the best teams to bet on lately. After failing to cover against Iowa State, they are 2-4 ATS in their last six games. They have closed as favorites in all 15 games this season.

A trio of guards have accounted for almost 60% of the Jayhawks’ points this season. Leading the way is Ochai Agbajiwith 20.6 PPG. He is shooting 53.3% from the field and 47.5% from three-point range. Christian Braun is next on that list with 16.1 points and a team-high 6.2 rebounds a game. He has been even sharper shooting the ball this season with an impressive 55.1 field goal percentage.

Remy Martin rounds out this trio with 9.8 PPG while hitting 48.3% of his shots from the field. However, he remains questionable for Saturday after missing Tuesday’s game. All told, Kansas is averaging 81.7 PPG as one of the highest scoring teams in the nation.

The Jayhawks are also one of the top shooting teams in Division I with a 50.1 field goal percentage. They are shooting 36.9% from three point range and 70.9% from the free throw line. Kansas is averaging 35.6 rebounds a game and holding opposing teams to 66.8 PPG on defense. 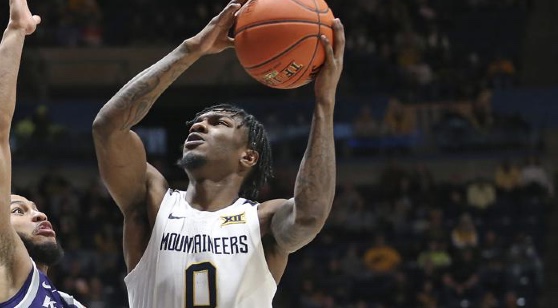 West Virginia has failed to cover the spread in seven of its last 10 games when facing Kansas. (AP)

Inside the Stats - West Virginia Mountaineers

Inside the Stats - Kansas Jayhawks

It is hard to see Kansas lose this game at home. However, I believe the Jayhawks are in for another struggle. West Virginia is better than advertised and this game presents an excellent chance to prove it belongs in the upper tier of the Big 12.

Past series trends are not in the Mountaineers’ favor. Kansas has won eight of the last 10 meetings SU and it has a 7-3 edge ATS. The total has gone OVER in three of the last five games between the two. This pick is based more on current form and West Virginia’s ability to keep things close.