The Gators looked to be making some headway on getting back on track after a three-game losing streak to ranked teams from Jan. 5-12. Florida rattled off three straight wins at South Carolina, and home against Mississippi State and Vanderbilt, from Jan. 15-22. It looked like the Gators were finally in good shape until a 70-54 curb-stomping at Ole Miss knocked them right back off the rails. The 54 points scored tied a season low, matching the total Florida scored in its stunning loss to Texas Southern back on Dec. 6.

Florida is still trying to adjust after losing leading scorer Collin Castleton to a shoulder injury suffered in practice earlier in the month. He tried playing through the pain against LSU and South Carolina, both wins, but he has missed the past two games and he is reportedly out indefinitely.

Meanwhile, the Volunteers got well against Vandy and LSU in the past week, making their way back from an embarrassing 107-79 road loss to Kentucky on Jan. 15. The Vols picked up a pair of covers, and the defense was back as well, allowing just 55.0 PPG in the past two games. Tennessee is a perfect 10-0 SU/7-3 at home this season, including victories over ranked foes Arizona and LSU. The Vols have won 11 in a row at home dating back to a loss Feb. 20, 2021 against Kentucky.

Despite Monday's loss in Oxford, the Gators are still a respectable 3-1 SU/ATS, but face a difficult game against another ranked team. They're 0-3 SU/ATS in three conference games against ranked teams, including a road game at Auburn on Jan. 8. The last victory for Florida against a ranked team came back on Nov. 24 on a neutral floor against Ohio State. Florida actually won its first two of the season against ranked foes, also topping then-ranked Florida State at home on Nov. 14.

Tennessee trucked a good LSU team by a 64-50 count at Thompson-Boling last time out, easily covering a 5.5-point number. The Vols shot 43%, or 22-of-51, while knocking down 10-of-28, or 36%, from behind the 3-point line. The Vols would have won by an even larger margin if not for a lapse in concentration at the free-throw line, connecting on just 56%, or 10-of-18. That's been a major bugaboo for the Vols this season, ranking just 290th in the nation with a dismal 67.4% mark from the charity stripe.

For totals, the defensive-minded Vols have hit the UNDER in each of the past four at home, while going UNDER in 10 of the past 13 games overall. The UNDER is also 4-1 in the past five against teams with a winning overall mark. 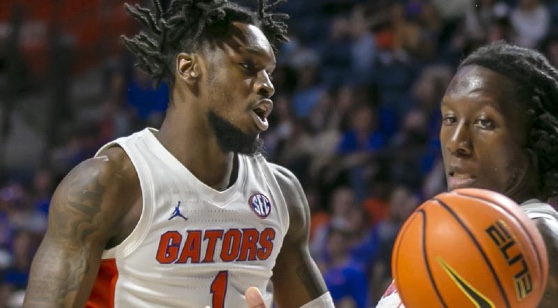 Florida has covered just once in its past seven road outings. (AP)

This would certainly be a tall order for the Gators even if Castleton were available. But the leading scorer is sidelined, and the Gators looked like a rudderless ship in its most recent road game against Ole Miss. Don't expect a better performance against a very good Tennessee team at home.

The Volunteers have won six of the past seven meetings in this series, also going 6-1 ATS in the past seven meetings. You can expect the Vols to bring it, as they're healthy, they're at home in front of their raucous crowd, and they're facing a Gators team without its best weapon. Tennessee is going to roll to a double-digit victory in this one.