The Providence Friars (16-2, 6-1 Big East) travel to meet the Xavier Musketeers (14-4, 4-3) in a Big East conference tilt at the Cintas Center in Cincinnati on Wednesday. Tip-off is scheduled for 6:30 p.m. ET, and the game can be viewed on CBS Sports Network.

Providence has bounced back with three consecutive victories since a Jan. 4 loss at Marquette, which was its first game without G A.J. Reeves (finger) due to an injury. Not only have they missed the offense of Reeves, the team's third-leading scorer, but they have missed his defense, too. Since he went down, the OVER has cashed in each of the past four outings, allowing an average of 74.5 PPG, which is over 10 points higher than the team's season average of 64.1 PPG allowed.

Xavier is also looking to bounce back from a setback against Marquette last time out, falling 75-64 on Sunday. Not only are the Musketeers 2-2 SU, but they're 0-4 ATS across the past four outings while hitting the UNDER in three of those four games. The Musketeers will be looking to hold serve at home in this series, as the home team has won each of the past four meetings dating back to Feb. 16, 2019. Providence has dominated the series, cashing in each of the past three, and eight of the previous 10 meetings.

The Friars have failed to cover in consecutive games for the first time this season. The last time Providence failed to cash in three or more straight games was an 0-3 ATS slide from Jan. 30-Feb. 5, 2021. Facing the Musketeers might help Providence get well against the number, as it swept the season series ATS last season vs. Xavier.

The Musketeers have managed to cover just once in the past seven games overall after an impressive 6-0 ATS run from Nov. 26-Dec. 15. The 1-6 ATS skid has been during conference play, with the only cover coming Jan. 7 at Butler in an 87-72 victory as 6.5-point favorites. Xavier has posted an 0-4 ATS mark in the past four games as a favorite, while going 0-3 ATS in the past three inside the league as a home fave.

For totals, the Musketeers have cashed the OVER at a 3-1-1 clip at home, while the OVER is 9-4-1 in the past 14 games after a straight-up loss. The OVER has cashed in the past three meeting in this series, while going 6-3-1 across the past 10. 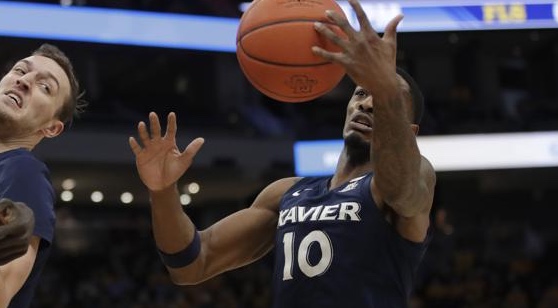 Xavier is 0-4 ATS across the past four games at home. (AP)

INSIDE THE STATS - PROVIDENCE FRIARS

I am super excited about playing this game myself. In fact, I took a few minutes out to grabs some extra coinage from the couch cushions and car seats, that's how much I love this play. Providence catching more than four buckets, even on the road, against a Xavier team just 1-6 ATS across the past seven games overall just doesn't seem to add up. Take advantage, and grab those points. The books might be overcompensating a bit because of the absence of Reeves, but the Friars are still 3-0 SU across the past three. And the Friars are an unbelievable 5-0 SU/ATS as an underdog this season, too.