The Jayhawks were rolling right along with five straight victories, all inside the conference, from Jan. 11-24. That league winning streak kicked off with a 62-61 win at Allen Fieldhouse in Lawrence, as Kansas missed badly on a cover as a 13.5-point favorite as the UNDER connected. However, Kentucky roughed up Kansas by an 80-62 score at The Phog, serving as a wake-up call for Rock Chalk. The 62 points tied a season low, equaling the production the Jayhawks had against the Cyclones in the first meeting last month. This time, however, KU was on the short end of the stick.

Kansas hit just 41% (24-of-59) from the field, while knocking down 33% (6-of-18) from behind the 3-point line. It doesn't happen often, but Kansas was outrebounded at a 39-to-26 clip. Star Ochai Agbaji managed to hit just 4-of-14 against the Wildcats, finishing with 13 points with three assists, two rebounds and a steal. Partner in crime Christian Braun also had 13 points, the only two players who went for double digits in points.

Iowa State lost four of five games from Jan. 8-22, but they have bounced back with a pair of wins. The Cyclones picked up an 84-81 overtime win at Oklahoma State last Wednesday, and a 67-50 win over Missouri in the Big 12/SEC Challenge on Saturday, covering an 11-point number as the UNDER connected. Three Cyclones went for double digits in points, including Tyrese Hunter, who was good for 14 points, four rebounds, four assists and two steals while hitting 7-of-12 from the field.

Kansas lost for the first time in the past six games against Kentucky on Saturday in the Big 12/SEC Challenge, but failing to hit the spread lately is nothing new. The Jayhawks are 0-4 ATS across the past four outings, and 1-6 ATS in the previous seven games. As a single-digit favorite, they've failed to cover the past five. 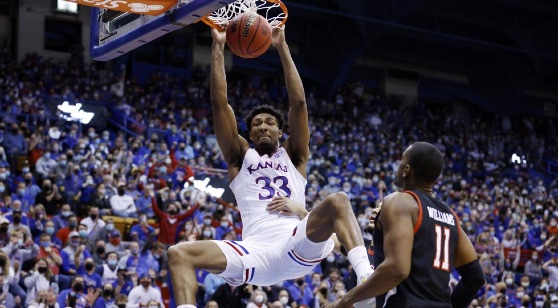 The favorite has cashed in five of the past six games in this series. (AP)

I just don't trust Iowa State, a team which has won just three of eight league games. The Cyclones were horrible last season, but they got off to a good 12-0 start which led to a ranking. However, the Cyclones have lost conference games to Baylor, Oklahoma, Kansas, Texas Tech and TCU. Yes, the game at Kansas was a near-miss, and Iowa State easily could've won that game. Don't expect Kansas to miss 24 shots from behind the 3-point line again, however, and they're likely not going to turn it over 16 times, too.

I'd play Kansas straight-up on the money line, as I am just a little nervous after its performance in the first meeting. Lay the points, but play a small-unit wager on that. Iowa State has won and covered two in a row, and four of the past six, so I think they could easily keep it close at home. Kansas is just much deeper, and I expect them to head out of town with a big W.